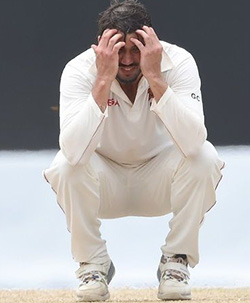 South Africa 309 for 9 dec (Markram 125, de Villiers 53, Jarvis 3-57, Mpofu 3-58) beat Zimbabwe 68 (Jarvis 23, Morkel 5-21, Rabada 2-12, Phehlukwayo 2-12) and 121 (Ervine 23, Maharaj 5-59, Phehlukwayo 3-13) by an innings and 120 runs
SOUTH Africa crushed Zimbabwe by an innings and 120 runs inside two days in their one-off day-night test at St George’s Park on Wednesday.
Forced to follow on after being bowled out for 68 in their first innings, Zimbabwe were shot out for 121 runs in their second innings. The match ended before the scheduled dinner break on the second day.
Fast bowler Morne Morkel was the destroyer in the first innings, taking five for 21, but medium-pacer Andile Phehlukwayo and left-arm spinner Keshav Maharaj engineered the second-innings collapse.
Phehlukwayo took three for 13 and Maharaj claimed five for 59, with stand-in captain AB de Villiers seemingly using his front-line fast bowlers sparingly so they could take advantage of the helpful conditions under floodlights. In the end they weren’t needed.
Zimbabwe put up a fight at the start of their second innings, reaching 54 before they lost their first wicket, although opening batsman Hamilton Masakadza was forced to retire hurt after being struck on the right elbow by a ball from Morkel.
The total reached 75 for one before the innings imploded, with four wickets falling in 14 balls. The last nine wickets fell for 46 runs in 15.4 overs.
South Africa needed just 68 minutes and 14.1 overs on Wednesday to take Zimbabwe’s remaining six first-innings wickets after they resumed on 30 for four.
Nightwatchman Kyle Jarvis was the top scorer for Zimbabwe, making 23.
MORKEL THE WRECKER-IN-CHIEF
Morkel, who took the first three wickets under floodlights on Tuesday, again made the first breakthroughs.
With his seventh ball of the morning, Morkel bowled lefthander Ryan Burl for 16, beating the batsman for pace with a ball angled in from around the wicket.
Four balls later he had Sikandar Raza caught behind after softening him up with a vicious bouncer, which Raza fended off the splice of his bat just short of gully.
Faced with almost an hour to bat before tea, Zimbabwe showed greater resistance in their second innings but Morkel remained a threat. Masakadza, who was out first ball to the tall fast bowler in the first innings, was hit on the elbow when the ball lifted off a good length and beat his forward defensive stroke.Advertisement