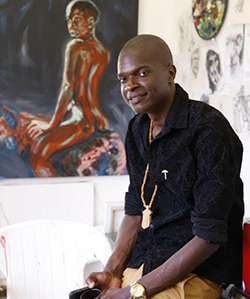 SPIRITUALITY is what fuels the work of Zimbabwean-born artist Ronald Muchatuta. The soft-spoken artist has been working in Cape Town since moving here in 2007, but it has not been easy.
Working independently as an artist and being from Zimbabwe have meant life often is a struggle, but recently the 31-year-old has been finding opportunities in various galleries around Cape Town.
It is clear from speaking to Muchatuta that he reflects deeply and philosophically upon all the work he creates.
The past few years have been a bit luckier for him, but it has not always been so. He described a period where he went through a financially difficult patch and didn’t exhibit work for almost three years.
“I went into some kind of hibernation and reflected on my career of being in the arts, making an income, trying something new, trying to mature and finding my voice and perfecting my technique.”
A big feat when you’re knocking on the door of galleries, but that was the inspiration for work that came later and one opportunity opened doors for others.
Last year, Muchatuta exhibited a powerful body of work titled The African Immigration Series, paintings that focused on acts of xenophobia or what he describes as “tribalism” that saw many African immigrants killed in attacks in April.
The artworks play with the image of the carrier bag often referred to as the China bag, a common item for those crossing borders worldwide.
The series also makes reference to “necklacing”, the forcing a tyre around a victim’s arms and chest and setting it on fire, commonly used in mob attacks. Necklacing often replaces the heads of figures in Muchatuta’s work.
The paintings boldly use the colours of the bag in red, white and blue and weave their lines and patterns into the human form.
“I wanted to push creativity without being overtly gruesome, so I started playing with the lines of the bag.”
The patterns of the bag often manifest in fire.
Muchatuta said the series had been conceptualised during the second wave of xenophobic attacks during 2011, but only took form fully last year. It looks at the emotions people experience during migration. The series is a reminder to South Africans of the ugly truth behind intolerance.
“I took a risk with this work without knowing if people would like it, but it was well received and the paintings sold well from this series.Advertisement

“It was paying homage and I was asking myself all kinds of questions, such as, ‘It could have been me, which triggered making work about this.’”
This theme resonated in a painful way for Muchatuta. The research process was difficult. But more significantly, Muchatuta has experienced this form of discrimination himself while living in South Africa, from all kinds of people, even from fellow artists.
“Whether the victims are legal or illegal, the sting of being labelled as an ‘alien’ in a place of non-origin affects many on a global scale. Migrancy is an issue that I choose to engage with on a regular basis.”
Last year, Muchatuta produced three different bodies of work. Other themes that found their way into his work include African mythology and a common thread of spirituality. “I’m more inspired by spirituality and I think that is the backbone of African art.”
Muchatuta employs the mediums of oil on canvas or board, charcoal on paper and mosaic. A process of experimenting with his dried paint palette on tiles developed his foray into mosaics.
Muchatuta’s studio is at Greatmore Studios in Woodstock. Recent highlights include exhibiting at the African Art Fair 2015 in Paris and the UN Milano Expo in Italy.
Muchatuta was born in the town of KwaChirumanzu, Mvuma. As a boy, he sketched and drew with a passion. Since art school was too expensive, he found mentorship under prominent Zimbabwean artist and gallery owner, Helen Lieroes.
Since then, Muchatuta has been working as an artist and exhibited in various galleries in Cape Town and Johburg from around 2008.
This report is taken from Weekend Argus.