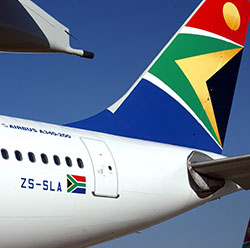 SOUTH African Airways is one of the continent’s leading carriers, but financial battles and seemingly endless changes of leadership have put its future at risk.
The loss-making state-owned airline has been stumbling from one crisis to another in recent years, with calls for privatisation routinely rejected by its sole shareholder, the South African government.
On Monday the company announced it would borrow about $170 million under a state guarantee to cover operating costs.
This month, the beleaguered carrier welcomed its fourth chief executive in six months, after a string of walkouts and interim replacements.
The government insists the airline is a strategic national asset, not a liability, and should not into fall private hands.

But that policy comes at an increasingly steep price.
Over the years, the South African treasury has dug deep to keep the airline afloat, and there is little sign the bleeding will stop soon.
In its latest phase of financial turbulence, SAA reported operating losses of $147 million for the financial year 2011-2012, due to souring fuel prices and reduced passenger volumes.
The ministry of public enterprises, which is handling the affairs of the flag carrier, has admitted that “further government support to SAA cannot continue.”
Still privatisation, partial or whole, may not be a panacea. According to aviation analyst, Joachim Vermooten, privatisation is not “a quick fix for SAA.”
“It is doubtful whether there would be investors that would be willing to risk substantial amounts of money in the short term when a reasonable return on investment is so uncertain and probabilities are against it,” Vermooten told AFP.
The airline recently submitted a 20-year turnaround plan to government, its tenth in 13 years, detailing ways to steer it into profitability.
Vermooten says 20 years is too long a period from a normal investment perspective.
“In the meanwhile SAA continues to incur losses and expand its activities utilising loans backed by government guarantees… to achieve profitability of the nature taken by its peers in similar circumstances.”
Independent analyst Linden Birns also dismissed privatisation as a “red herring”, arguing that all the airline needs is the right leadership.Advertisement

“The issue here is not about being privately owned or state owned. It’s about having the right mandate, solid strategy and being adequately financed,” Birns told AFP.
“If you don’t have all of those, you are never not going succeed,” he said adding that there was nothing unusual about a business going back to shareholders for cash.
Birns mentioned Singapore Airlines and Ethiopian as proof that state-owned carriers can achieve profitability.
Despite its woes, SAA is head and shoulders above many airlines on the continent, which are grounded by debt and poor safety records.
Its African network, boasting 28 destinations makes it one of the few airlines offering direct links within a continent notorious for limited air travel.
In recent years direct links between Johannesburg and economic centres like the coal mining town of Ndola in Zambia, the Rwandan capital Kigali, and Bujumbura, the capital of Burundi, have been established.
Other links with major economic partners like China, India and Brazil have been launched.
But in the mean time cost cutting is likely to be felt by passengers. The fiercely competitive route from Cape Town to London was discontinued last year.
For now, therefore, South African Airway’s future is up in the air.