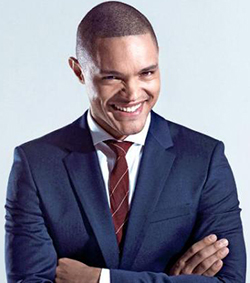 SOUTH African comedian Trevor Noah will take over as host of “The Daily Show” on September 28 as the successor to widely acclaimed American TV anchor Jon Stewart, the program said Thursday.
It will be a baptism of fire for what is an extraordinary promotion for the 31-year-old Noah, who is relatively unknown in the United States.
He has appeared only a handful of times on the show as a contributor since last year but has a big following online and in his homeland.
“The Daily Show” announced the September 28 date by posting on Twitter to its more than 3.4 million followers a short video of the comedian horsing around on set promising a “new and sexy” show.
“Late night will NEVER BE THE SAME. Or maybe it will. Watch to find out,” it said.
The video clip shows Noah, in a suit and tie, practising “welcome to The Daily Show” and easing himself into the host’s swivel chair, as a silent Stewart looms behind.
Stewart hosts his last show on August 6 after leading the widely acclaimed late-night satire for the last 16 years, turning it into an influential source of news and views for younger Americans.
“The Daily Show” announced in March that Noah would take over.
The program on Comedy Central relentlessly pokes fun at politicians, national and international events and mainstream cable news.
Born in his country’s Apartheid-era to a black, South African mother and white, Swiss father, Noah grew up in the Johannesburg suburb of Soweto.
He made his US television debut in 2012 on “The Tonight Show with Jay Leno” and was the host of his own talk show in South Africa.Advertisement