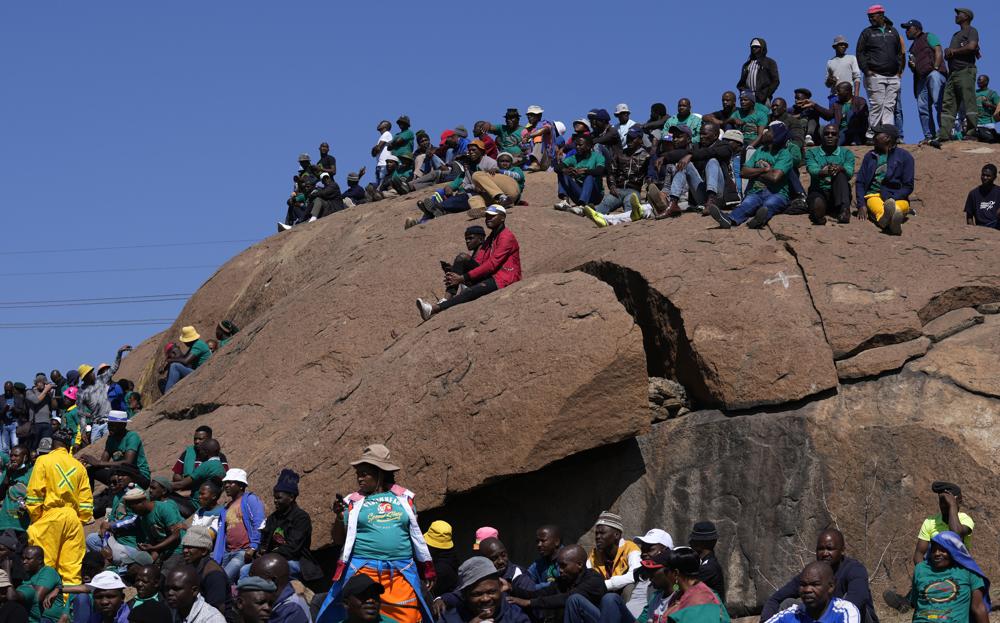 MARIKANA: A somber gathering of about 5,000 people marked the 10th anniversary of what has become known as the Marikana massacre, when police opened fire on striking miners, killing 34 in 2012.

“10 Years of Betrayal,” said T-shirts worn by many at the commemoration, expressing bitterness that those killed have not received justice and that promises of better pay and conditions for the miners have not been fulfilled.

Clustered on a small hilltop near where the shootings took place, the miners sang mournful songs and chants. Many at the event wore green and black, the colours of the Association of Mineworkers and Construction Union that led the strike.

A small contingent of police monitored the gathering.

“Ten years later, there has not been justice. We all saw the miners being killed in broad daylight but nobody has been arrested for it,” the regional secretary of the mineworkers’ union Phuthuma Manyathi told South Africa’s eNCA broadcaster before the gathering.

The Marikana killings were preceded by days of violence in which 10 other people were killed, including police and security guards.

Videos of police opening fire on the miners shocked South Africa and were broadcast around the world, sparking outrage and leading to a commission of inquiry to investigate the police actions. Although the official investigation found police responsible for the killings, no one has been charged with the deaths.

The government has paid more than 170 million rands (more than $10 million) in compensation to 280 claimants, mainly the families of the slain mineworkers and those injured that day or who were wrongfully arrested, it said in a statement earlier this month.

There are still 24 claims to be addressed by the end of August, according to the government.

Addressing the miners and family members attending the commemoration, AMCU president Joseph Mathunjwa called for justice for the mineworkers killed 10 years ago.

He also gave the title deed for a house to the family of Mgcineni Noki, one of the miners killed, as part of the union’s effort to compensate the widows.

Mathunjwa said this year his union would be demanding a basic salary of at least 20,000 rands (about $1,250) for miners, significantly higher than what the striking miners demanded in the Marikana strike in 2012.

He also called for foreign companies seeking mining rights in South Africa to be required to contribute to the social development of communities where the mining shafts will be established.

A survivor of the shooting, Mzoxolo Magidiwana, 34, said he feels let down as the living conditions in Marikana have not improved in the decade since the killings.

“I regard this (August 16) as the day I survived death when it was staring at me. Many of the people that I was with on that day, their lives ended in this place,” Magidiwana told The Associated Press.

“To survive nine bullets, I still wonder how God saved me when people were trying to kill me,” said Magidiwana. “It is a day that I respect very much. Every year I literally get shivers because I know that I was not supposed to be here. I have not seen yet why God saved me but I know there is a reason he spared my life.”

Magidiwana said that he is disappointed that despite the strike, the lives of the miners and their families have not improved.

“Everybody can see that nothing much has changed in this place. People still live in the same conditions as before,” he said. “Even at the koppie (the hill where the shootings occurred), there was supposed to be a monument, an official remembrance similar to others that are done for significant events in this country, but there is nothing.”