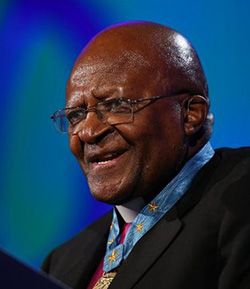 A SOUTH African Jewish online publication on Friday apologised to the country’s outspoken retired Anglican archbishop Desmond Tutu for publishing an article comparing him to Adolf Hitler.
The weekly South African Jewish Report (SAJR) had by Friday pulled down the article it had posted on its website the previous day.
“The paper apologises unconditionally to the Archbishop,” it said, adding, “the offending piece has been removed”.
The publication had on Thursday ran an opinion piece penned by a South African Jewish man, Leon Reich, in which he compared the “midget” Tutu to Adolf Hitler and Soviet Union’s ex-dictator Joseph Stalin.
“Constantly self-appointed destructors of the Jewish people appear in every generation,” he said in the article.
“The latest self-appointed midget of history is Archbishop Desmond Tutu,” he stated.
Tutu, a Nobel Peace Prize winner who is regarded as a moral beacon in South Africa, has long been outspoken about the Israel-Palestinian conflict, and has drawn fire from the religious right.
“Just as it was more important for Hitler to kill Jews than to protect the fatherland in the last days of the war, so it is more important for Tutu to kill Jews rather to protect his fellow Christians,” said Reich.
Reich, who is the chairman of the local branch of Likud party, told AFP that he wrote the article in his personal capacity.
Along side the article had been a black-and-white photo-shopped picture showing a “Tutu” wearing a Hitler’s cap, and with a superimposed black moustache.
Reich said he was “disappointed” that the publishers of the newsletter had chosen to strike off his article.
“South Africa is a free country, it doesn’t matter whether one is in the minority or in the majority, you are entitled to say your opinion,” he told AFP.
The publishers said the “unfortunate and mistaken placement” of the article “has caused serious upset among its readers and others.”Advertisement