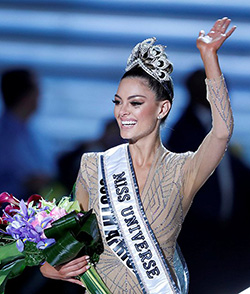 MISS South Africa, Demi-Leigh Nel-Peters was on Sunday crowned Miss Universe 2017 at a pageant held at Planet Hollywood Casino Resort in Las Vegas, USA.
Nel-Peters, who recently graduated with a business management degree, beat 91 other contestants, to become only the second South African to clinch the coveted crown after Margaret Gardiner won the title way back in 1978.
Miss Colombia, Laura Gonzalez, was first runner-up with Miss Jamaica, Davinna Bennett settling for second runner-up.
This year’s competition, the 66th since inception, had the largest number of contestants in history.
South African President, Jacob Zuma, showered praises on Nel-Peters, saying her achievement was tremendous.
“She has hoisted the South African flag higher and continues to inspire many young women who look up to her to reach even higher for their dreams,” he said.
“We congratulate her most heartily and wish her the best during her reign which is South Africa’s reign,” Zuma added.Advertisement