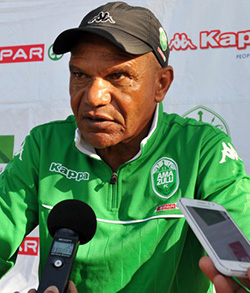 AmaZulu general manager Lunga Sokhela has insisted that Usuthu have not gambled with the club’s fortunes by appointing a relatively unknown Zimbabwean coach Joey Antipas.

Antipas took over the reins after Steve Barker was sacked following a dismal start to their National First division campaign.
“I don’t think it’s a gamble, here in South Africa we seem to be recycling the same coaches, they all play musical chess around teams, they go, come back, go, and the league is not improving,” said Sokhela.
“So to bring somebody from outside, football is a global game, it’s an international game – it doesn’t speak different languages. If he’s been able to achieve the success he was able to achieve in Zimbabwe with far less resources, why can’t he replicate the same here in South Africa whether it’s NFD or not.
“The nature of the NFD and Zimbabwe is similar, a lot of pace, a lot of running, a lot of hunger, a lot of players want to make a name for themselves.
“We need somebody who will bring something new, a breath of fresh air. It’s the right time for us to bring a new brain into the club and he is hopefully going to lead the club to great things.”
Advertisement