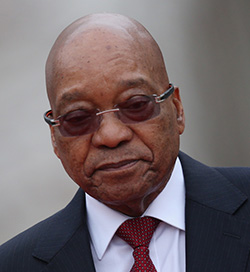 JOHANNESBURG: A key committee of South Africa’s ruling ANC party will hold an emergency meeting Monday as the nation awaits word on whether President Jacob Zuma will resign soon because of corruption allegations, South African media reported.
The announcement of a meeting of the national executive committee of the African National Congress came ahead of an expected speech on Sunday by Deputy President Cyril Ramaphosa, who says he has been negotiating a power transition with Zuma.
Many former supporters of the president want him to resign because of his links to scandals that have sapped support for the ruling party and hurt one of Africa’s biggest economies, but there is a growing sense of unease over the lack of information about the confidential talks between Zuma and Ramaphosa, his expected successor.
While some ANC leaders are appealing to South Africans to wait patiently for a resolution, the political opposition speculates that Zuma is trying to secure concessions, including protection from prosecution in exchange for his resignation.
“This mediation cannot continue,” said Refiloe Nt’sekhe, spokeswoman for the Democratic Alliance, the biggest opposition party. “Jacob Zuma must face the full consequences of his actions whatever they may be, and there can be no deal or leniency for him or his family.”