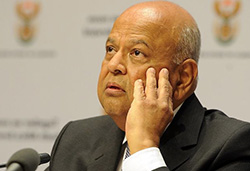 JOHANNESBURG: South Africa’s finance minister faces a fraud charge and must appear in court on Nov. 2, the country’s top prosecutor said Tuesday, deepening concern about the weak economy and rifts within the government of President Jacob Zuma.
South Africa’s currency, the rand, dropped more than 3 percent after the move against Finance Minister Pravin Gordhan, who has been widely praised for his stewardship of the economy and is scheduled to give a budget speech on Oct. 26.
The Democratic Alliance, the main opposition party, described the move to prosecute Gordhan as “a disaster for the economy.”
The finance ministry harshly criticized the legal proceeding, saying it will damage “the economic well-being of South Africans and essential processes of government” and that the case is “contaminated by abuse for political ends.”
While Shaun Abrahams, head of the National Prosecuting Authority, said the plan to prosecute Gordhan was not politically motivated, there have been numerous allegations that government factions close to Zuma want to wrest control of the national treasury from the independent-minded finance minister.
Worries about government infighting prompted the deputy president, Cyril Ramaphosa, to caution last month that an efficient government “is not at war with itself.”
In a statement, Zuma expressed support for Gordhan, who recently spoke to overseas investors and ratings agencies about South Africa’s potential for growth.
“Our society is anchored on the rule of law as well as fair and just judicial processes. In this regard, Minister Gordhan is innocent until and unless proven otherwise by a court of law,” Zuma said.
Gordhan will be prosecuted for illegally approving an early retirement package for a former tax official who then continued to work, said Abrahams, the prosecutor. He also said a police probe continues into an allegedly unauthorized unit of investigators set up years ago at the country’s tax agency at a time when Gordhan led the agency.
The market jitters following Abrahams’ announcement echoed similar nervousness late last year.
At the time, Zuma replaced a respected finance minister with a relatively unknown figure. The currency plummeted in response and Gordhan, who had been finance minister from 2009 to 2014, was brought back to try to restore confidence.Advertisement