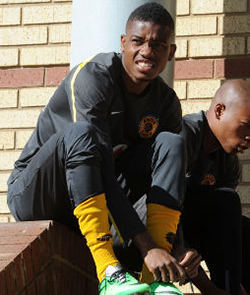 SOUTH African Absa Premiership champions Kaizer Chiefs have retained Zimbabwe international Ovidy Karuru after putting him up for a loan deal at the end of last season.
Karuru was frozen out by former coach Stuart Baxter, but has found favour in new boss Steve Khomphela in the new season.
The former Masvingo United and Gunners star was one of three players retained by Amakhosi when the transfer window closed on Monday. Simphiwe Mtsweni and Levy Mokgothu are the other two.
The club announced in June that the trio, as well as Chris Matombo and Zitha Macheke, would go out on loan to enable them opportunities of game-time elsewhere after they all battled to break into the team last season.
Mtsweni and Karuru each managed just two Nedbank Cup starts last season, while Mokgothu is still yet to play in an official match for Chiefs since arriving from Moroka Swallows at the beginning of last season.