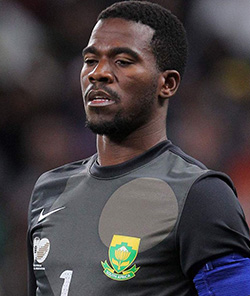 SOUTH Africans turned out in huge numbers in Durban on Saturday for the funeral of national football captain and goalkeeper Senzo Meyiwa, who was murdered last weekend.
Meyiwa, who had just turned 27, was gunned down by an intruder while visiting his pop star girlfriend south-east of Johannesburg in a crime that shocked the nation.
Family and friends were joined by government members and the top names in South African football among a crowd of 30,000 at the funeral ceremony at Durban’s Moses Mabhida Stadium, broadcast live on television.
The crowd fell silent and many wept as Meyiwa’s coffin, shrouded in the national flag, was driven into the stadium in a white SUV, followed by members of his club the Orlando Pirates and top officials.
“Death is a thief that has stolen a bright shining light from the nation”, Durban mayor James Nxumalo told the ceremony.
“The entire nation is crying. We have all lost. Our condolences to Orlando Pirates and Bafana Bafana (the nickname for South Africa’s national team). “Our hearts are bleeding.”
The goalkeeper had grown up in Umlazi, a township near Durban on the Indian Ocean coast. He was to be buried in the afternoon at the Heroes Acre at Chesterville cemetery, which is usually reserved for martyrs of the struggle against apartheid.
Also attending his funeral were the country’s football federation head Danny Jordaan and Senzo Mchunu, head of the government of Kwazulu-Natal, the province where Meyiwa was born, which has decreed a period of mourning.
Meyiwa did not concede a goal in four recent Africa Cup of Nations qualifiers as South Africa defeated Sudan, defeated and drew with Congo Brazzaville and drew with defending champions Nigeria.
More than 17,000 people were killed in South Africa last year, but the slaying of a popular sporting hero has stunned even this crime-weary nation.
A 25-year old man, Zenokuhle Mbatha, was charged Friday with murder and armed robbery in connection with his killing, after being identified by witnesses.
Advertisement