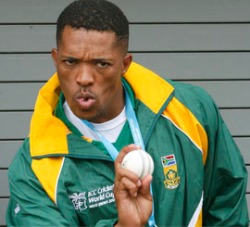 Zimsportsnews.com reported this week that the 38-year-old Ntini, who took 390 Test wickets for South Africa in 101 matches, is understood to be in talks with Zimbabwe Cricket about joining head coach Dav Whatmore’s management team.

It is believed that Zimbabwe are also on the lookout for a batting coach from Bangladesh and a specialist spinning coach out of Pakistan.

Whatmore’s team are currently involved in a titanic ODI series against Afghanistan in the United Arab Emirates, where they are level 2-2 going into the final game of the series in Sharjah on Wednesday.

Afghanistan had won the first two matches, but the visitors hit back this past Saturday and Monday to square the series.

Ntini will bring a wealth of experience to the Zimbabwean team in limited-overs cricket as well, having played in 173 ODIs (266 wickets) and 10 T20 games (six wickets).

Since retiring from international cricket in 2010 and all forms of the game in 2012, Ntini has been a TV analyst and also opened a Makhaya Ntini Cricket Academy in Mdantsane near East London in July 2014.

He will hope to inspire an inexperienced Zimbabwean outfit led by veteran captain and all-rounder Elton Chigumbura.Advertisement