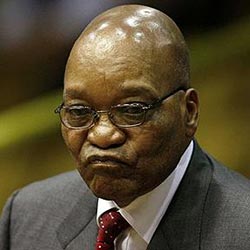 DRIVING home through dead traffic lights to a half-cooked dinner is the new normal in South Africa, where rolling power blackouts have become a common drudgery. The government warns that forced outages will continue for years.
South Africa’s electricity grids are overloaded, forcing the state-run power supplier to cut electricity to certain areas, it says.
Wet coal, a collapsed power plant and failing generators have all been blamed for sudden electricity cuts, said the power utility
But the underlying problem is a chronic supply shortage. Four top executives of the power utility were suspended last week, as the government tries to find a solution.
The blackouts have cast a shadow over much of South Africa’s economy. The country’s growth rate has been revised to 2 percent, a less optimistic view of the already low 2.5 percent projection in the last quarter of 2014.
President Jacob Zuma announced the formation of a “war room” to deal with the electricity blackouts and the country’s troubled power company.
The struggling power supplier will also receive a $2 billion cash injection to “stabilize its financial position,” Finance Minister Nhlanhla Nene said recently.
South Africans are riding out the intermittent waves of darkness with a combination of frustration and humour. Headlamps and car cellphone chargers are must-have items, according to a popular radio station.
The blackouts have also led to a new language that combines public relations obfuscation with doomsday alertness —the national power supplier has introduced the term “load shedding” for blackouts. The state-owned Eskom describes it as a “last resort to balance electricity supply and demand.”
Colour-coded blackout schedules, littered with jargon, are unreliable but the feeling of insecurity as streetlights go black in cities with high crime rates is a certainty.
“I don’t trust the schedule,” said Lyle Horsley, a Johannesburg resident exasperated by the power utility’s inconsistency and excuses. “Wet coal? Really? In all this time they haven’t figured out how to protect the coal?”
Living in one of Johannesburg’s many gated communities, Horsley and her young family feel exposed by the unannounced shortages — their burglar alarm fails and their electric fence becomes pointless.Advertisement

South Africa’s industries are badly hit. The South African Chamber of Commerce, desperate to lessen what it called the “inestimable” impact of the blackouts, has gone as far as to suggest cutting South Africa into four different time zones, a sort of daylight savings to keep the power on.
“Restaurants are one place where people find comfort during load shedding,” said Wendy Alberts, head of the South African Restaurants Association.
Candlelit restaurant dinners are no longer just for romance. But a number of restaurants were forced to close in February alone, citing high generator costs, rotting food and late staffers stuck in traffic, Alberts said.
Improving the power utility’s reputation, will be difficult. South Africa installed its first electric streetlights in 1882 and under South Africa’s apartheid government, nearly all white households, including remote farms, had access to electricity, while black homes had limited access to power, even in the cities.
After the country’s all-race elections, the new government pushed the state utility to light up every home in the country.
Today, more than 85 percent of all South African homes have electricity, according to Statistics South Africa, but that race to extend electricity to all has come at a price.
“We wanted to keep the lights on at all costs,” said Khulu Phasiwe, the power company’s spokesman, admitting that the power utility had not done maintenance work on its aging coal-fired power plants since 2009, one of the reasons for the blackouts.
In thousands of homes, however, unpredictable rolling blackouts are viewed as a problem of the privileged.
In slums on the outskirts of South Africa’s cities, linking to the power grid comes from crude, illegal connections.
Miles of wire are connected to a single electrical transformer on a street corner, creating a pirate power grid. The wires hang low as they make their way into squat zinc shacks, live and deadly as the wires lie exposed, across the untarred streets of squatter camps. Electrocution is common.
The single light bulb in Sophie Magoro Louw’s home last shone its dim light two years ago. The illegal connection she bought for about $30 was weak and she now prefers to rely on candles and oil lamps.
Living in what the government calls an “informal settlement,” she is one of the 15 percent of South Africans who remain off the electricity grid. She just shrugs when asked about blackouts.