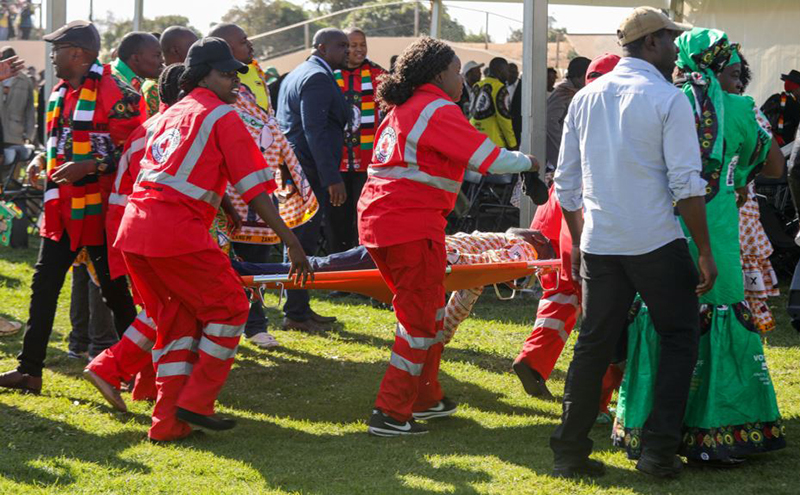 JOHANNESBURG: The African National Congress has condemned the two separate bomb blasts on Saturday at a Zanu PF rally in White City Stadium in Bulawayo, Zimbabwe, and the deadly blast at a rally in Addis Ababa in Ethiopia.

“The bomb explosion missed the President of Zimbabwe Emerson Mnangagwa by a few inches while Zanu PF chairperson Oppah Muchinguri-Kashiri and many others were left injured,” ANC spokesman Pule Mabe said on Sunday.

In Addis Ababa, at least one person was killed and eight others critically wounded in an explosion at a rally attended by new Ethiopian Prime Minister Abiy Ahmed, he said.

“The ANC views these as barbaric and cowardice acts of assassination attempts and deliberate ploys to destabilise and create disunity and confusion in our sister African countries.

“These coward and barbaric acts have no place towards a peaceful, prosperous, and integrated Africa that is transforming and seeks to accelerate initiatives for growth and sustainable development. They must be utterly condemned and not be allowed to spread and to be assimilated anywhere,” Mabe said.

The ANC joined the call on police and security agencies in these countries to find the perpetrators of these “heinous and backwards acts” and to bring them to book.

“We  further call on all communities on the continent and here at home [South Africa] to be vigilant and to report any suspicious acts to the police and security agencies. We must not allow our countries to be taken back to the use of violence and assassinations as a means to silence political opponents and those who occupy different positions to us,” he said.

Africa should continue “rising through friendship and be at peace with itself and the world, and we should not use violence and destabilisation mechanisms to resolve our political or any other differences among us”.

“We pass our deepest and sincere condolences to the family, close friends, and comrades of the deceased, and we wish a speedy recovery and good health to all those injured,” Mabe said.