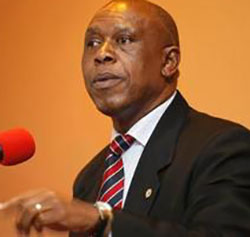 FIFA presidential hopeful Tokyo Sexwale said at the weekend it was high time Africa takes the reins at the world football governing body and fixes the “heartbroken” game.
For 111 years FIFA “has not had an African” leader.
“Africa has been on the bench, warming it, and now it’s about time,” Sexwale was quoted as saying by various South African newspapers.
“The time for diversity has arrived and it is Africa’s time.”
He was speaking at the weekend conference of the southern African football associations, COSAFA.
“It’s not about race… it is about showing that FIFA is for everyone and not just for certain people,” said the 62-year-old veteran politician and global campaigner against racism in sports.
“You have got to show that we are an international body. Nine leaders of FIFA have all been from one area (Europe).
“You are sending a wrong signal if certain people can be accorded leadership and others are not.”
The millionaire businessman, who was jailed alongside Nelson Mandela under apartheid rule, is among the candidates to replace Sepp Blatter as president of world football’s governing body in next February’s elections.
“You are sending a signal that some… are only good as hunting ground for votes. Africa cannot be that,” he said, flanked by fellow aspirant Jerome Champagne.
Sexwale has previously vowed to clean up the sport and salvage the image of FIFA, which has been dented by a string of corruption scandals.
“We are bleeding. Football is not broken, but heartbroken,” he said.
“The brand is damaged and has to be changed.”
Four of the five rival candidates vowing to take over the top FIFA job also attended the meeting.
The other candidates to replace Blatter include Prince Ali bin al Hussein of Jordan, UEFA general-secretary Gianni Infantino, Asian football head Sheikh Salman bin Ebrahim al-Khalifa of Bahrain and Champagne, a former assistant general secretary of FIFA.Advertisement