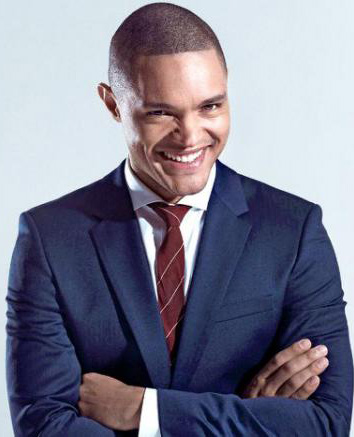 THE child of a prohibited relationship between a black woman and a white Swiss father in apartheid South Africa, Trevor Noah has travelled a long way in a short time to take over one of the biggest shows in US television.
Little known to U.S. audiences, the South African comedian will replace Jon Stewart as the host of the Emmy Award-winning, late-night parody newscast “The Daily Show,” Comedy Central said on Monday.
The Viacom Inc-owned network said it selected Noah, 31, because he is an “enormous talent” and “wickedly funny.” His premiere will be announced at a later date.
Noah said it was an honour to step into Stewart’s shoes.
“He and the team at ‘The Daily Show’ have created an incredible show whose impact is felt over the world,” Noah said in a statement. “I’m excited to get started and work with such a fantastic group of people.”
Noah, born to a black South African mother and white Swiss father, was passed off by his family as albino for much of his childhood because under apartheid laws, different races could not mix and he was not allowed to live with either of his parents.
With his razor-sharp wit that transcends South Africa’s many social and racial divides, Noah, 31, rose to prominence by tackling stereotypes and leaving his audiences laughing — and squirming — in their seats.
During his regular sold-out shows, he often relates stories of his upbringing in Soweto as a mixed-race boy among black children in the tough township where both Nelson Mandela and Desmond Tutu once lived.

His ability to switch between several ethnic languages during his stand-up routine quickly turned him into a much-loved household name in South Africa, where his surprise new job was welcomed as a major national triumph.
Before bursting into the country’s small comedy scene, Noah dabbled in acting and radio before starting his comedy career only as recently as 2007.
Noah released his first DVD, “The Daywalker”, in 2009 which became the country’s biggest selling comedy video, and he began hosting his popular comedy television talk show, “Tonight with Trevor Noah”, in 2010.Advertisement

President Jacob Zuma, a polygamist with over 20 children, has on many occasions been the butt of his jokes, often via a brilliant parody of the president’s mangled manner of speech.
Noah’s first big international break came in 2012, when he appeared on “The Tonight Show” with Jay Leno on US television.
The following year he starred in “Trevor Noah: African American”, a TV special exploring his bewilderment at discovering modern America.
“It’s a great day for Trevor Noah and an extraordinary milestone for African comedy,” Evert van der Veer, the head of Comedy Central Africa, said after Noah was named as Jon Stewart’s replacement on the satirical “The Daily Show”.
“We salute Trevor’s achievement with pride on our hearts and a tear in our eye.”
US Ambassador to South Africa Patrick Gaspard greeted the news with glee.
“This is gonna be wild!” he tweeted. “America, fasten your seat belts!”
The ruling African National Congress (ANC) party and the opposition Democratic Alliance quickly added their own congratulations.
Noah, who is not married and has been based in the US for about three years, is next due to perform live in South Africa for 15 concerts at the Teatro at Montecasino in Johannesburg between May 29 and June 28.
Tickets have yet to go on sale, but they are guaranteed to sell out fast. His grandmother still lives in Soweto and may be getting a famous visitor.