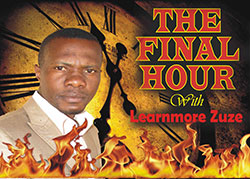 IT IS always wonderful to receive insightful feedback from readers of the Final Hour column. Following the article in which I deliberated on the near-blasphemous practice  of church members adopting a prophet’s name on the understanding or rather misunderstanding that they are ‘daughters’ or ‘sons ‘of that prophet, I realize the need to illuminate further on the issue of the so-called spiritual fathers, even as used by the Papacy.
The Bible repeatedly and roundly condemns the practice of calling anyone on earth ‘Father’ and it should be clearly understood that the bible, in this regard, is not referring to our biological fathers; it is a reference to religious superiority. This distinction is well illustrated in the following verse: “Furthermore we have had fathers of our flesh which corrected us, and we gave them reverence: shall we not much rather be in subjection unto the Father of spirits and live?(Hebrew 12:9) The bible acknowledges our biological fathers and the respect that should be accorded to them. And then concerning the spiritual side it says, “…shall we not much rather be in subjection unto the Father of spirits and live? Undoubtedly the Father of spirits is the Creator whom the bible is admonishing us to give even deeper reverence than our flesh fathers.
Jesus Christ, the founder of Christianity from whom the name derives, gives the most eloquent presentation in regard to the issue of spiritual fathers. He says: “… all of you are equal as brothers and sisters and do not address anyone here on earth as ‘Father,’ for only God in heaven is your Father.” (Matthew 23:9). Surely if this statement does not put the matter to rest I wonder what else can. That is an uncompromising and unequivocal statement by the voice that created heaven and earth. Here, evidently, Christ is not dissuading us from calling our male parent with the ‘father’ title. What Christ is referring to is the practice that has become so rife in churches today, that of so-called spiritual fathers; a term which has no biblical grounding at all.
The term spiritual-father is an abused concept today and the Bible continues to be twisted in this regard. Mixing motivational concepts and the Bible, Prophet Elijah for example, is often cited as having been Prophet Elisha’s mentor and the relationship is given a meaning beyond what it was in essence. John, in the first and second epistles, writes in a manner which is often quoted to cement the practice. John wrote to the folk, “I write these things to you my dear children that you may not sin…” (1 John 2) John’s reference to the flock as ‘my little children’ is taken to mean that he was a ‘spiritual father’ to the flock. Also, Apostle Paul, having instructed Timothy in the faith is claimed to have been a spiritual father to Timothy. Now it should be made abundantly clear that the term spiritual-father as it is used today has little to do with what is in the Bible. It is a term coined and derived mostly from the aforementioned incidences.Advertisement

The bible, contrary to the spiritual-fathers mantra, has been mutilated by those pursuing a separate agenda. There is a whole world of difference between what is in the Bible and what they practice today. Far from the term spiritual father, the bible talks of fathers-in-the faith; the likes of Apostles John and Paul. Even the relations of Paul and those he instructed in the faith should not be taken out of context to mean an acknowledgment of modern spiritual fatherhood practices. Fathers in the faith were not spiritual fathers at any rate. In fact, the difference between the two is the same as the difference between fridge temperature and furnace temperature.
Fathers in the faith, as in Paul and the prophets’ case, simply played a role of guiding new converts and instructing them in sound doctrine. They provided wisdom and guided the church in the right direction by virtue of years and experience in the church. Fathers in the faith were not held in such esteem as to be given undue spiritual authority over the church. They never had anyone kneeling or prostrating before them. They never had people sticking pictures of them in their houses and on personal belongings. No-one ever called them ‘father’ and they did not make anyone a prophet.
What we are strangely witnessing today actually borders on the occult. The term spiritual father nowadays implies an acceptance by the ‘spiritual son’ that their spiritual origins, progress and being have their roots on the spiritual father giving it a downright occult shade which Christ spoke against. This is one reason we won’t tire of stating that the professed prophets of today who have to visit certain countries to be ‘anointed’ by their spiritual fathers should be treated with all the suspicion necessary. This ‘Father’ or ‘Papa’ business is total blasphemy whether practiced by Catholics or by New age churches.
As I conclude, it is sad that these practices have, as a result, distorted Christianity and failed to produce Christ-centred believers because they produce individuals who look upon fallible man instead of the infallible Christ.
Learnmore Zuze can be reached at lastawa77@gmail.com