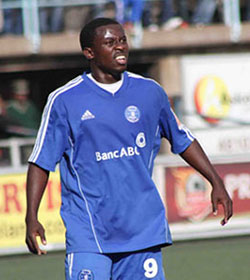 DYNAMOS and Highlanders’ continued sponsorship by financial institution BancABC, is now a major doubt with reports suggesting there has not been any word from the bank on the future of their marriage, less than a month before the deal comes to an end.
BancABC are the principal sponsors of the country’s biggest clubs, two of the few clubs who enjoy corporate sponsorship.
Both Dynamos and Highlanders went into bed with BancABC three years ago, signing three-year sponsorship deals with the bank taking care of the welfare of the players including paying their salaries.
The three-year deal expires on December 31 this year and there are genuine fears this could be the end of the banks marriage with the two clubs which could plunge them into serious financial problems.
Dynamos president Keni Mubaiwa said Monday that there had not been a word from the sponsors regarding the future of their marriage.
“Up to now they have not said anything regarding the issue of sponsorship. We are not sure of their position.
“We are just waiting to hear from them on the way forward because the deal we signed with them ends on December31,” said Mubaiwa.
Efforts to get comment from Highlanders chief executive Ndumiso Gumede were fruitless.
However, due to the harsh economic environment prevailing in the country, Banc ABC could be forced to reconsider their obligation to the two clubs.
Both sides have in the past three years enjoyed a measure of stability with Banc ABC taking care of the welfare of players including paying their salaries and allowances. The bank also gave the two clubs $80,000,00 to sign players every season.
Dynamos optimistic
Dynamos board secretary Mtho Nkosi acknowledged that due to the harsh economic situation, organisations including Banc ABC will be forced to rethink their obligations.
Still, he remained optimistic, saying they were already in negotiations with a number of potential partners who were willing to come on board.
“We appreciate very well what our sponsors Banc ABC have done and will continue to do,” said Nkosi.
“We also have a number of stakeholders who are willing to come on board. In this tough economic environment, a number of companies will be forced to revisit and rethink their obligations.Advertisement

“Some have gone back and folded their hands but it has had effect on their operations. Sports in general, and soccer in particular, is an organ where organisations can use to get exposure.”
He added: “There might be concerns but there is a co-relation when it comes to sponsorship.
“Others would want to remain visible during these difficult times to preserve the little revenue that is available but I will not, at this stage, say how Banc ABC will move forward.”
In contrast, Caps United- the third biggest team in the country is one of several clubs without corporate sponsorship. They are bankrolled by Harare businessman Farai Jere.
United have this season defied odds to win the championship for the first time in 11 years under very difficult circumstances.