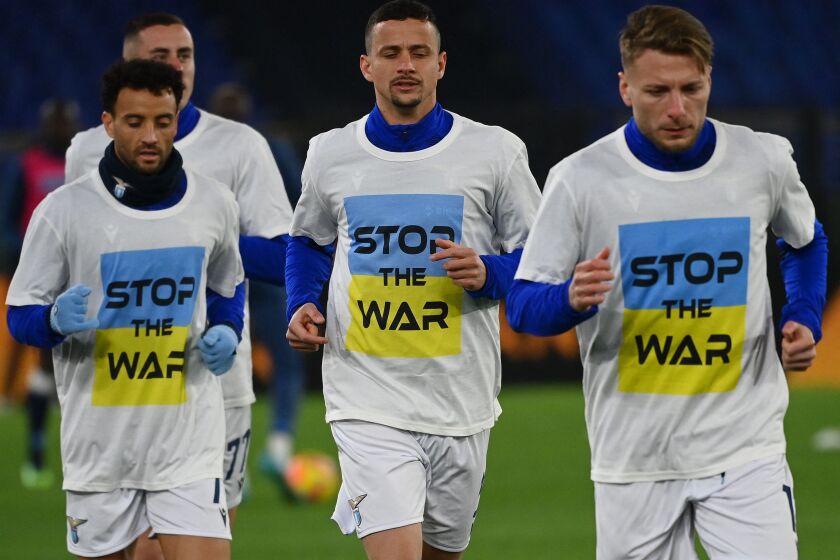 LAUSANNE: Russia remains barred from international soccer competitions including the Champions League after the Court of Arbitration for Sport rejected appeals by the national soccer federation and four clubs on Friday.

The ruling added that UEFA and FIFA did not exceed their authority while dealing with “unforeseen and unprecedented circumstances.”

CAS said it was unfortunate that the decisions of UEFA and FIFA as a result of the invasion were having “such an adverse effect” on Russian football.

“But those effects were, in the panel’s view, offset by the need for the secure and orderly conduct of football events for the rest of the world,” CAS ruled.

Russia had been excluded this year from men’s World Cup qualifying and the Women’s European Championship, and its clubs withdrawn from European competitions.

The decision on Friday was widely anticipated by Russian clubs. They have been making plans to schedule domestic cup games on the dates when European games will be played next season.

Russia’s soccer federation said it “strongly disagrees with the CAS decision and reserves the right to continue protecting its own interests.” Next steps could include a demand for compensation or a new appeal to the Swiss supreme court. The Swiss Federal Tribunal overturns CAS rulings only on limited grounds such as abuse of the legal process.

Among those benefiting from the decision is Ukrainian club Shakhtar Donetsk. Russia’s exclusion means it keeps a place in the Champions League group stage as the team from the next highest-ranked country. Shakhtar has not played in its home city of Donetsk in eastern Ukraine since the area was taken over by Russia-backed separatists in 2014.

“Sport in Russia and football in particular serves as a major tool of state propaganda, furthering Russia’s policies of death and destruction,” Shakhtar CEO Sergei Palkin said in a statement. “And we thank the court for echoing the organizations from different sectors around the world in excluding and isolating Russia from any ‘normal existence’ until it ends the war on Ukraine and relinquishes all occupied Ukrainian territories.”

Ukrainian clubs will play their European games next season at neutral venues abroad, with Shakhtar planning to host games in Poland.

After the invasion began in February, Poland, Sweden and the Czech Republic all pledged to boycott World Cup qualifying playoff games against Russia scheduled for March. That left UEFA and FIFA to choose between excluding Russia or potentially allowing the Russian team to qualify by default.

The Russia men’s team has been disqualified from the ongoing Nations League, bringing automatic relegation. Its next major competition comes in March, when qualifying begins for the 2024 European Championship. The women’s national team was replaced by Portugal at the European Championship in England this month and has been removed from qualifying for next year’s Women’s World Cup. Russia also remains barred from a range of junior and age-group competitions.

CAS is also due to hear other cases involving Russian athletes and teams in numerous other sports. Many governing bodies have justified excluding Russia on similar safety grounds to those cited by UEFA.

Olympic sports have mostly followed the lead of the International Olympic Committee, which says its recommendation for athletes from Russia and its ally Belarus to be excluded is aimed at protecting those competitors from possible harm.

The soccer cases were among the first to be decided at CAS because of the imminent deadline for the Champions League qualifying draw.

CAS did not refer to the fighting as an “invasion” or “war” — terms rejected by Russia, which calls its actions a “special military operation” — and did not assign blame.