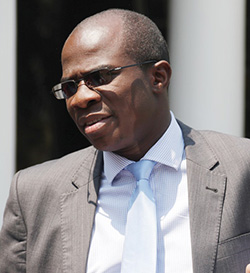 SPORTS and Recreation Minister Makhosini Hlongwane says the dismal performances by the senior Zimbabwe cricket team are a cause for consternation and should not be allowed to continue.
Hlongwane said he has noted with “alarm and deep concern”, the recent trend in which the national cricket team is losing to Associate Nations.
“First it was the white wash by Afghanistan, an Associate nation in Bulawayo, then another white wash by Bangladesh and now Afghanistan has bowled out Zimbabwe for 82 to win the first ODI of the current series in Sharja, UAE,” said Hlongwane.
“The Zimbabwe cricket community knows, as much as everyone does, that Zimbabwe can play better than what is currently on show, and it boggles the mind why Zimbabwe continues to deteriorate.”
Hlongwane added that time “come for a frank conversation on the goings on at Zimbabwe Cricket and a candid introspection by the board, in order to bring back the glory days of cricket in Zimbabwe”.
“I would like to know from cricket authorities why Zimbabwe cricket continues on a downward spiral and how this can be salvaged.”
The Minister is also concerned that there are no “clear structural and other interventions by the board that seem to arrest the continued downward spiral of cricket in Zimbabwe with a sense of urgency, as is deserved by the current situation”.
He challenged the Zimbabwe Cricket Board, to “very quickly realise that it cannot be business as usual if Zimbabwe is to be saved from the humiliation of continued defeats at the hands of Associate and other nations”.Advertisement