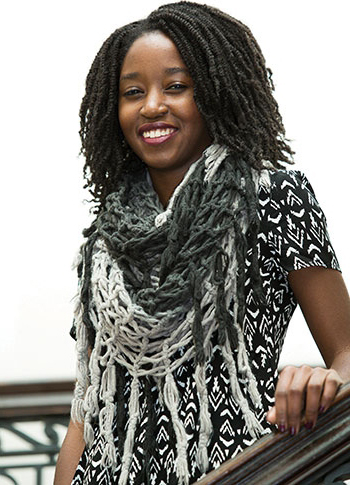 SUNSHINE CITY: From Harare, Zimbabwe, Rutendo Chigora, 22, is a University of Pennsylvania senior double majoring in international relations and political science, and minoring in English. In December, she was awarded a non-U.S. Rhodes Scholarship and will study at the University of Oxford in Oxford, England.
WORLD VIEW: A Penn World Scholar and Benjamin Franklin Scholar, Chigora says she was attracted to Penn because of its research focus, opportunities for interdisciplinary study, and rigorous curriculum.
“I came in as part of the inaugural class of the Integrated Studies Program,” she says.
“That was really interesting to me because I was really looking for a way to explore and synthesize different ways of looking at the world. I also think that the financial aid package that I received was a big part of [my decision to come to Penn].”
OUTSIDE INFLUENCE: Chigora says she chose international relations as a major because she realized that a lot of what occurs on the African continent is shaped by those outside of it.
“I was really interested in exploring how the world relates to, how the world sees, and how the world formulates policy for Africa,” she says.
“A lot of the money that’s going into Africa through development aid is coming from somewhere else, and I wanted to have a fundamental understanding of how other parts of the world relate to Africa.”
AGAINST ALL ODDS: Chigora says was “stunned” when she found out she was named a Rhodes Scholar.
“I think I applied knowing that nobody applies for the Rhodes Scholarship expecting to get it,” she says. The scholarship is awarded annually to 83 individuals from 14 countries.
FOODADELPHIA: Outside of her coursework, Chigora says she enjoys cooking.
“I think Philadelphia kind of amplified my love for food because, one, it made me appreciate the cuisine in my country a lot more, but second because I’d never been exposed to so many food cultures,” she says.
She also enjoys watching and sometimes playing soccer, and has recently taken up photography.
MASTER OF HER FATE: At Oxford, Chigora plans to pursue a master of public policy or a master of philosophy in development studies.Advertisement

She says she grew up being told that she was going to be a lawyer (“because I talk a lot,” she says) but she is now more interested in working on social entrepreneurship and doing some policy work.
NO PLACE LIKE HOME: Chigora says she plans to return to Africa after finishing her studies, either in her native Zimbabwe or another part of Sub-Saharan Africa.
“I do think that because of the kind of understanding I’ve gained about the African continent, I could really just live anywhere and try to make my way,” she says.
“But I want to be in Africa because the weather’s better and the food is really good.”
Rutendo Chigora: Rhodes Scholar & Activist