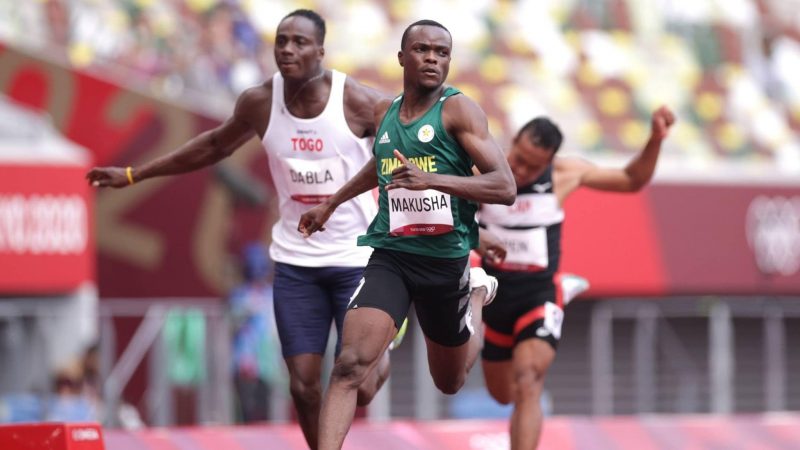 Ngoni-Makusha in action at the Tokyo Olympics
Spread This News

TOP Zimbabwean sprinter Ngoni Makusha failed to progress to the semifinals of the men’s 100m race at the ongoing Tokyo Olympic Games after finishing a disappointing seventh in his first-round heat at the Olympic Stadium in Japan Saturday.

The 27-year-old, who has a personal best time of 10, 17 in the 100m found the going tough at the sports biggest stage after crossing the finish line in a disappointing time of 10.43 seconds.

Makusha failed to live up to his earlier promise when came first in the preliminary round early in the day in a time of 10.32 seconds.

His win in the preliminary round ensured he qualified for the first round of the heats where he eventually failed to make an impact after crossing the finish line in the seventh position.

The Chitungwiza-bred sprinter was in a star-studded heat which included African record holder Akani Simbine from South Africa.

And as had been anticipated it was Simbine, who came first in 10:08 seconds ahead of Ivory Coast’s Arthur Cisse, who stopped the clock in 10:15 seconds.

There were two more Africans in the Heats including Liberian Emmanuel Matadi who finished fifth in 10:25 seconds while Togolese Fabrice Dabla was disqualified for a false start.

Dabla’s disqualification seemed to have played on Makusha’s mind as he was late off the blocks and failed to recover, creating his own race at the back with Canadian Bismark Boateng who he beat on the line.

The result meant Makusha became the fourth Zimbabwean athlete to exit the Tokyo Olympics after Donata Katai and Peter Wetzlar as well as rower Peter Purcell-Gilpin.

Golfer Scott Vincent is the only remaining Zimbabwean athlete in the Olympic men’s golf competition, where he is tied for 17th position heading into the final round on Sunday.