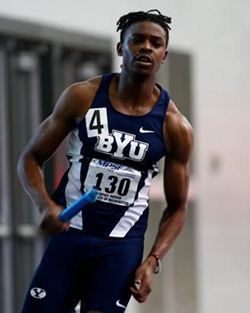 UNITED States: Brigham Young University (BYU) junior sprinter Tatenda Tsumba describes himself as not being very excitable. But when he learned he would be a member of the Zimbabwe Olympic team at the 2016 Summer Games in Rio de Janeiro, he let himself go.

“I found out about a month ago and I couldn’t contain the emotions,” Tsumba said. “I’m a calm person but I jumped up and down and screamed a little.
“I was hoping to know I would be going at the end of the season but then it didn’t happen. I was trying to be patient and not try to rush or lose my focus. I maintained what I was doing in training and kept my faith.”

Tsumba is one of a few athletes with Cougar ties who will be competing in Rio as he will be racing in the 200-metre dash beginning on Aug. 16.

He said it’s an exciting opportunity for him to be at this point, preparing for that event.

“I can’t explain it,” Tsumba said. “I’ve been looking forward to this for a long time. Now that it is here, I need to breathe and calm myself down. I’m just happy it’s happening.”

It’s been an objective of his for a long time that he has finally achieved.

“When I grew up in the sport, that was a goal I set for myself,” Tsumba said. “I missed out on the London Olympics and my parents live in London, so I really wanted to go. From there, I just kept the dream going.”

He said that anyone who has these type of aspirations have to be willing to be patient and persevering.

“My advice is to keep a positive mind,” Tsumba said. “I think that as athletes — and even in life in general — we set goals for ourselves but it doesn’t always turn out that way.
“But maybe God has a different path for you, so keep your positive mind, keep training, keep doing everything you can and eventually when the time is right it will happen for you. It’s all about not being put down by obstacles that may come in your way.”

He said he has enjoyed the response to his Olympic news from his teammates and others he has gotten to know in Utah.Advertisement

“It’s been great,” Tsumba said. “Everyone has been so encouraging. There are such nice people in Provo and at BYU. There have been words of encouragement from everyone and they are just so happy for me.”

He expects to be in close contact with a former Cougar teammate who will also be competing in Rio.

“Jared Ward used to be on the track team and we’ve talked,” Tsumba said. “I’m sure I’m going to see him there and we are going to hang out.”

He also will get a chance to get more familiar with members of the Zimbabwe Olympic team, most of whom he doesn’t know well.

“We have one more sprinter who is based in Florida,” Tsumba said. “We also have marathon runners, a couple of players on the swim team as well as a women’s soccer team.
“Personally I know the guy in Florida who runs track and does sprints. We’ve met and kept in touch. The others I don’t have a personal connection to. I just know some of the names.”

Now he is in Rio where he will be a part of the Opening Ceremonies (Friday night), entering the stadium with Zimbabwe.

“From what I have been reading, a lot has been put into it,” Tsumba said. “I know it’s going to be a big show and people will be watching. I’m just glad to be one of the people representing my country and BYU as well. That will be a great honor for me.”

He said that while he hopes to perform well and he enjoys the competition, he’s most looking forward to being an example of what can be accomplished.

“I get messages from people saying that I encourage them to do better,” Tsumba said. “A lot of the people I grew up with, that I ran with back home can’t believe that this is the same guy they were running next to.
“But it encourages people, makes them realize that if they put in the work, they can also get to this level.”