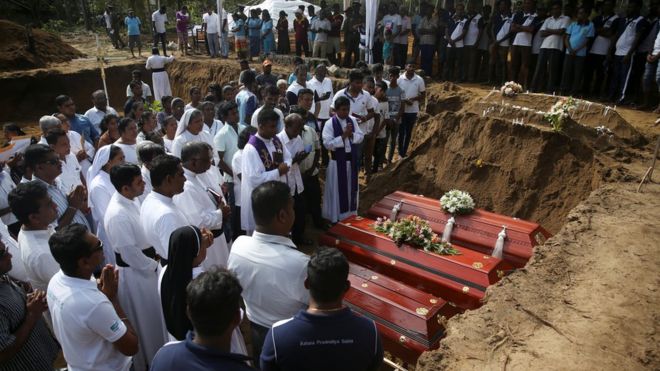 The first mass funeral has begun in Sri Lanka as the country marks a day of mourning for the victims of Sunday’s bomb blasts.

The death toll of the attacks on churches and hotels has increased to 310, police said on Tuesday.

The country has observed three minutes of silence and a state of emergency is in effect to prevent further attacks.

Police have now detained 40 suspects in connection with the attack, a spokesman said Tuesday.

The mass funeral is taking place at St Sebastian’s church in Negombo, north of Colombo, which was one of the places targeted in Sunday’s blasts.

Earlier, a moment of silence was observed at 08:30 (03:00GMT), reflecting the time the first of six bombs detonated.

Flags were lowered to half mast and people bowed their heads in silence in respect to the victims as well as the 500 people injured during the attacks.

The state of emergency gives police and the military sweeping powers to detain and interrogate suspects without court orders  powers that were last used during the nation’s civil war.

NTJ, the group named by the government as the main suspect, has no history of large-scale attacks but came to prominence last year when it was blamed for damaging Buddhist statues.

However, neither NTJ, nor any other group, has admitted carrying out Sunday’s bombings.