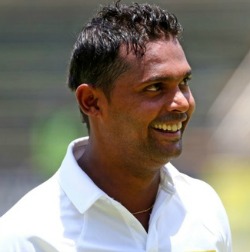 ASELA GUNARATNE scored his maiden Test hundred as Sri Lanka posted a mammoth 504 to put Zimbabwe on the back foot on the second day of the second Test at Harare Sports Club on Monday.
Playing just his second Test, Gunaratne scored 116 to marshal the tail to good effect and frustrate the Zimbabwean bowlers, before his dismissal brought the end of the Sri Lankan innings on the stroke of tea.
The tourists began the day on 290 for five, with Gunaratne on 13, and despite losing centurion Dhananjaya de Silva they were able to make rapid progress during the morning session.
De Silva was caught and bowled by leg-spinner Graeme Cremer for 127, but Gunaratne added 54 for the seventh wicket with Dilruwan Perera at a swift rate.
Perera was then trapped lbw by Cremer for 34, but Gunaratne went to lunch on 64 having helped Sri Lanka add 124 runs in the session.
After lunch the 30-year-old increased his rate of scoring further in a 75-run stand for the eighth wicket with captain Rangana Herath, who made 27.
Seamer Donald Tiripano had Herath caught behind and then bowled Suranga Lakmal, but No. 11 Lahiru Kumara held on long enough for Gunaratne to reach three figures and carry the score past 500.
It was the fifth straight Test match in which Zimbabwe, who trail 1-0 in the two-match series, had conceded 500 runs in an innings.Advertisement