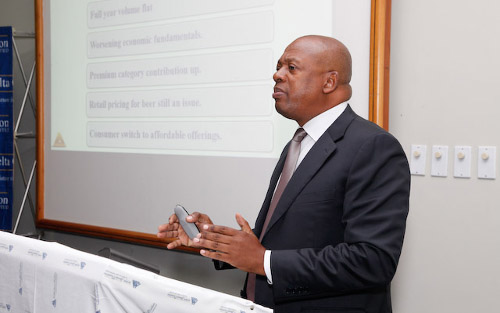 “There was a general improvement in the economic environment over the six-month period under review owing to a relatively stable foreign exchange market and improved availability of foreign currency from both the auction system and relaxed foreign currency regulations,” he said.

Last year, the Reserve Bank of Zimbabwe (RBZ) introduced a foreign exchange auction system which has been widely hailed by companies for eradicating exchange rate distortions while improving the operating environment for companies.

During the period under review, Afdis’ volumes grew by 39% from the prior period mainly driven by spirits and ciders which grew by 57% and 33% respectively.

However, wine sales declined by 22% mainly affected by reduced activity in the restaurant and hotel channel compounded by supply disruptions due to Covid-19 restrictions.

“Revenue and operating income grew 40% and 8% respectively. In historical cost terms the increases were 736% and 450% respectively driven by high volume and cost containment. Net cash on hand was $195 million,” Gowero said.

Owing to the improvements, Afdis declared an interim dividend of $50 per share payable in respect of all qualifying ordinary shares of the company.

In light of Covid-19 induced disruptions on business, Afdis has also put in place a business continuity plan to observe and implement protocols in accordance with World Health Organisation (WHO) guidelines leading to minimal disruption to the company’s operations during the lockdown periods.

“Going forward, the anticipated good agricultural season is expected to benefit the economy by increasing disposable incomes and improved food supplies resulting in net savings on the food import bill.

“The full impact of Covid-19 remains uncertain. The company has implemented mitigatory measures that will ensure business continuity,” Gowero added.