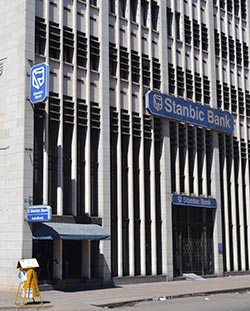 STANBIC Bank, a unit of South Africa’s Standard Bank Group, has reported an after tax profit of $9,5 million for the six months to June from $8 million in the prior comparative period driven by growth in income.
Net interest income was up 11 percent to $18,1 million while loans and advances increased to $319 million from $312 million. Deposits from customers and other banks also grew to $397 million from $388 million.
“A conservative approach to lending has become necessary in order to safeguard depositor funds and maintain the bank’s quality lending,” chairman Sternford Moyo said in a statement accompanying the unaudited financials.
Operating expenses were five percent higher compared to the prior period due to transaction processing costs, relating mainly to costs incurred in repatriating soiled notes and importing new notes, the bank said.Advertisement