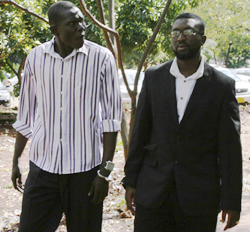 STAR FM DJ Munyaradzi Milimo appeared in court on Tuesday charged with murder over the alleged poisoning a love rival.
Milimo, 32, who is known radio as DJ Munya, was charged alongside two other men implicated in the kidnap and murder of Ortneal Magorimbo, who allegedly had an affair with the radio presenter’s estranged wife and workmate, Anna Hassen.
Clad in a neat black suit and white shirt, the popular DJ looked relaxed and composed in the dock as charges were read out to him.
He was not formally asked to plead and was remanded in custody to June 5.
Also charged were Taurai Janhi, 34, and Mohammed Matare, 31, who were arrested on Sunday, two days after DJ Munya’s arrest.
Magorimbo went missing on May 13 as police launched a missing person’s investigation. After Munya’s arrest, Magorimbo was dumped outside his rented flat in the city on May 17 barely clinging to life.
He collapsed on the staircase and was rushed to West End Hospital where he later died. He had allegedly been forced to drink a pesticide by his abductors.
Prosecutors say DJ Munya, who suspected that his wife was having an affair with Magorimbo, a workmate at Premier Optometry Services in Harare, earlier this month confronted him over the issue and threatened him with unspecified action.
A few days after the altercation, Magorimbo went missing prompting the police to arrest the radio presenter on Friday. He was initially charged with kidnapping but following Magorimbo’s death, the charge was upgraded to murder.Advertisement