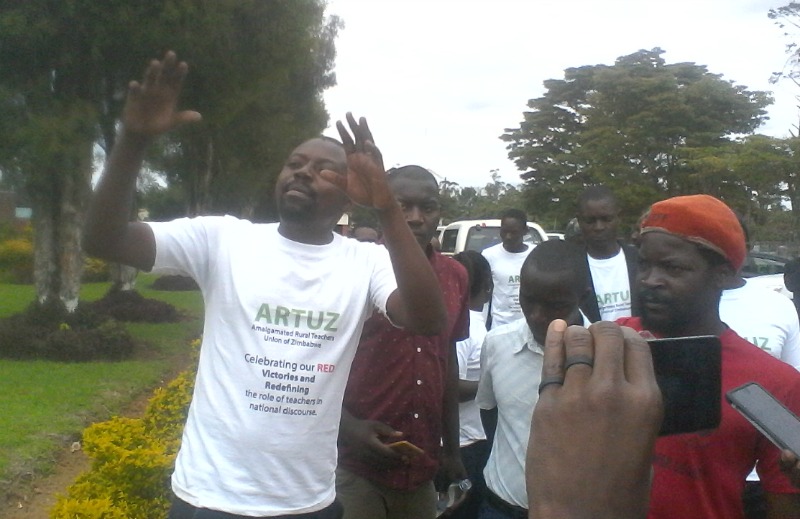 The rural teachers
Spread This News

Marondera: The State on Monday declined to prosecute in a case in which nine leaders of the firebrand Amalgamated Rural Teachers Union of Zimbabwe (ARTUZ) were arrested during a wage protest march in Macheke Saturday enroute to Harare.

The educators were midway through a 275km protest march from Mutare while demanding United States dollar wages as well as the payment of their full 2018 bonuses by government.

The group was arrested at a service station in the tiny farming town and briefly detained at Marondera central police where Criminal Nuisance charges were preferred against them.

Police claimed they were not notified about the march as required by the country’s tough security laws, allegations the teachers’ group disputed.

The defiant educators were Monday brought before a Marondera magistrates’ courts by police but the State declined to prosecute on charges it felt could not hold in court.

According to the state, police had been notified of the marathon march.

Addressing ARTUZ members soon after the charges were dropped, Masaraure said they were continuing with the march which they are expected to end in Harare this Wednesday.

The teachers have planned to go camp at Finance Minister, Mthuli Ncube’s offices at the New Government Complex.

“We will continue with our struggle. Enough is enough,” Masaraure said.

“We don’t want another ESAP (Economic Structural Adjustment Programme) in Zimbabwe. We will continue to soldier on with our demands for decent salaries in US dollars.

“This will not benefit only the teachers but even the police officers who have arrested us and court officials here. We thought (President Emmerson) Mnangagwa was appointing a minister of finance but he appointed a monster of finance.”

Meanwhile, police dog handlers were called in to monitor hundreds of ARTUZ members and affiliate organisations who had besieged the court grounds to follow the proceedings.

Soon after leaving the courts, the teachers marched through Marondera CBD before returning to the highway.