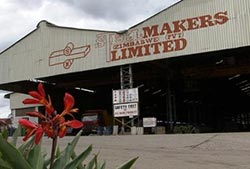 STEELMAKERS Zimbabwe has applied to the National Employment Council (NEC) for the iron and steel industry to be exempted from paying salary increments from 2013, citing a harsh operating environment.
Last year, the NEC set $270,00 as the minimum wage for workers in the industry. This increase would have seen Steelmakers employees get a 12,5 percent increase on their salaries across the board.
Steelmakers general manager Alexander Johnson said while the company would want to pay the NEC minimum wages, it had no fiscal space to do so.
“We are facing a difficult time in the industry and struggling to even get a profit. Steel prices fell from $1 250 per tonne to $650 when production costs are around $750. This means we are not even breaking even,” Johnson said.
Officials from the NEC declined to comment, but a member of the workers committee branded the company’s application as ‘mischievous.’
“We are hanging in there because we have hope that things will turn for the better. We have not shut down because it will be more expensive and difficult to restart operations,” said Johnson.
Last week, he said the company was courting Indian investors to raise $30 million to recapitalise its Masvingo steel plant after failing to raise the money locally.Advertisement