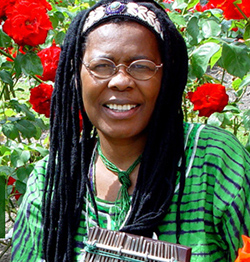 ONE of the world’s best-known performers on the Mbira (thumb piano) will be the star attraction at Live Theatre in Newcastle this weekend.
Stella Chiweshe is known as the Queen of Mbira in her native Zimbabwe, although she is also renowned as a singer around the world (she has performed at three Womad festivals of world music).
The proper name of the thumb piano, which is a lot easier to transport across continents than a baby grand, is mbira dzavadzimu.
It is one of the traditional instruments of Zimbabwe and Stella has been playing it since the 1960s when it was even rarer for women to play than now.
Stella will be supported by The Crossings Band and both will be heralding Refugee Week (June 15-21), a UK-wide programme of arts, cultural and educational events highlighting the positive contribution made by refugees.
The programme on Tyneside has been put together by Crossings, a community education and integration project whose musical element is represented most noticeably by the accomplished band.
Crossings’ line-up includes musicians who grew up in the North East of the UK or who came to the region from other parts of the UK or overseas.
On Monday, June 15 (5-7pm) Stella Chiweshe will run a free open workshop in singing and mbira playing at Key House.
Two of the co-organisers, Abraham and Sara, say: “Having been in the North East for about two years now as asylum seekers, we have had the opportunity to meet people who are in the same situation as us.
“We have interacted with them, heard their stories and felt their anguish and pain.
“We have also come to realise that these people, unfortunately referred to as ‘scroungers’ and ‘benefit claimants’, are people full of talent, skills and hopes. They have only fled their countries for reasons they have not contributed to.
“This is what we have tried to highlight in this exhibition. It is an exhibition of their words, their sorrows, their pain, their frustrations and, indeed, their hope for a better and peaceful future.”Advertisement