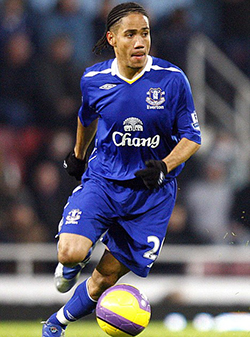 EVERTON midfielder Steven Pienaar says he is fully fit and ready to play as he eyes a loan move to the English Championship.
Everton said last week they will not discuss a new contract with Pienaar until the end of the season, but with his current deal due to expire in June, the 34-year-old is eager to secure his future, after spending eight seasons as a player with the Toffees.
“I’m 100 percent fit and felt in good form when I played some games in January,” Pienaar told KickOff.com.
“I haven’t been in the squad for the last six weeks, I don’t know why, and obviously this is a concern for me. But that is the coach’s decision and I must respect that.
“Waiting until the end of the season to hear whether or not Everton wish to extend my contract is unreasonable, I feel. It’s not the way I envisaged ending my career at a club that has been such a major part of my life.
“My representatives have tried a number of times, unsuccessfully, to get hold of the club to talk about my future and get some indication, so I remain in the dark.
“Obviously I need to keep my options open because I would still like to keep playing for another couple of seasons at least.”
There was some interest from China in January, and Pienaar says he is open to any opportunity in Europe, the USA, Middle East or Asia.
“I have always been up for a challenge and if the environment is right then I would love to give something new a go.”
But for his immediate prospects over the next few months, the former Bafana Bafana skipper says he would be open to a loan move to the English Championship before that window of opportunity closes this coming Thursday.
“I am really just looking for game-time at this stage of my career so in my current situation I wouldn’t mind dropping down to the Championship to help a club there until the end of the season. That would be a great challenge.
“I still feel like I have got a lot to offer and at this stage of my career, what’s most important for me is playing games.”Advertisement