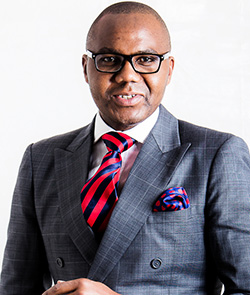 STEWARD Bank has announced the appointment of Dr Lance Shingai Mambondiani as substantive CEO for the bank with immediate effect.
The bank is a subsidiary of telecoms giant, Econet Wireless Private Limited.
Mambondiani has been Acting CEO since February 2015 following the departure of South African banker Kwanele Ngwenya in January.
A statement released by the bank’s board chairman, Oluwatomisin A Fashina reads, in part: “Following regulatory approvals, the Bank’s Board of Directors is pleased to announce the appointment of Dr Lance Shingai Mambondiani as the Chief Executive Officer with immediate effect.
“Dr Mambondiani has been with the bank since July 2013 and had been Acting Chief Executive Officer over the last six months.
“In this role he has contributed to the bank’s restructuring, turnaround and overall strategic direction of the bank.”
Mambondiani joined Steward Bank from the United Kingdom as Business Development and Strategy Executive.
He has been a key player  in the implementation of the bank’s tech based strategy and the development of several new products and services which have transformed Steward Bank into one of the country’s most innovative banks where other banks appear to be struggling.
Steward Bank was recently nominated as one of Africa’s most Innovative Banks at the African Banker Awards (2015) held in Abidjan, Cote D’Ivore on the 27th of May 2015.
A PhD graduate from Manchester University, UK, Mambondiani has worked in the banking and financial services industry in the UK, Ireland, Switzerland and South Africa for several institutions that include Barclaycard, Investec, UBS and others.
He holds a PhD in Finance from the University of Manchester where he was also a post graduate lecturer in Financial Markets and Corporate Governance at the same University.
Steward Bank was established and rebranded in 2012 following the acquisition of TN Bank by Econet Wireless from TN Holdings.
The bank has adopted a unique, innovative and aggressive banking model which leverages on the mobile network operators’ infrastructure.
Econet founder and Executive Chairman, Telecoms billionaire, Strive Masiyiwa recently sounded the death knell for traditional transactional banking.
He was quoted by This is Africa, on the sidelines of a Clinton Foundation Forum in Marrakech, Morocco saying “Transactional Banking side of banking is gone, because telecoms providers are innovating quicker to put banking services in the hands of mobile phone users”.Advertisement

Steward bank’s current positioning looks set to further this agenda.
The new appointment is expected to bring stability to the bank following a massive shake-up which resulted in the departure of a number of the bank’s senior executives in February.