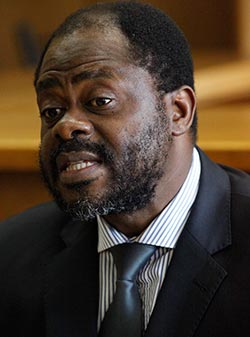 THE Zimbabwe Stock Exchange (ZSE) has said negotiations with Seal InfotechMiddle East, the company which won the tender to install the bourse’s automated trading platform are underway and will be concluded next month.
ZSE chief executive, Alban Chirume told The Source following a press briefing that negotiations with Seal Infotech were likely to take longer because of the magnitude of the project.
“We are negotiating with them and expect to conclude the negotiations by February,” he said.
The initial 11 shortlisted bids were narrowed down to two, leaving CIS/CMA Small Systems of Sweden and Infotech from the Middle East to compete.
Chirume said the two international organisations were given an opportunity to give oral presentations and demonstrations to support their bids but the Swedish firm was unable to participate.
“Additional due diligence measures were taken during the month of December and as a result of the outcome of these efforts, the board of ZSE has approved the engagement of Infotech Middle East subject to successful contract negotiations,” he said.
He said they visited Ghana, Kenya and Tanzania where similar systems had been installed.
Although Chirume declined to divulge the cost of the work, he said Infotech was a reputable company with offices in Dubai, Singapore and London.
The project, which is expected to cost $2 million, would modernise the bourse, replacing the manual system where brokers place orders of bids on a board during trading sessions on the floor.
Apart from enabling longer trading hours, the ATS would reduce the fraudulent sale of non-existent stocks. The new system would also interface with the planned Central Securities Depository (CSD), to help in settling transactions.
Seal Infotech is a leading business solutions provider in the Middle East region, having started operations in 1995, addressing small companies to large enterprise-wide business and technology needs.
The company focused mainly on SAP (systems, applications and programmes) business solutions.Advertisement