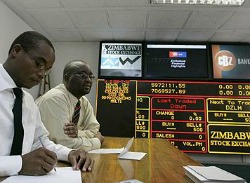 THE Zimbabwe Stock Exchange’s (ZSE) main index shed 13.7 percent and market capitalisation fell by $300 million during the first six months of the year, official data showed on Friday, as fewer foreign investors bought shares and the economy slowed down.
The ZSE’s industrial index, the main gauge of activity on the bourse, stood at 101.04 points at the end of June, down from 114.85 points at the start of January. The index fell 47 percent compared with the same period last year.
The ZSE, which had been propelled by foreign buyers looking for bargains since Zimbabwe adopted the U.S. dollar in 2009, has been on a slide since the end of 2014 as the economy slumped.
Foreigners bought shares worth $40 million between January and June compared to $71 million in the same period last year.
Market capitalisation fell to $2.8 billion at the end of June from $3.1 billion at the beginning of the year.
“This year obviously we expect the market to come further down. We expect by year end to go down by 20 percent,” said Peter Kadzere, managing director at Smartvest Wealth Managers.
A devastating drought that has left 4 million Zimbabweans facing hunger is this year expected to hit economic growth and earnings of a majority of listed companies, which rely on agriculture for inputs, as well as those in retail business.
Zimbabwe has since March faced shortages of US dollars, which it adopted in January 2009 when it dumped its own currency that was ravaged by hyper-inflation. Some mining companies and manufacturers have said the shortages have seen banks delaying payments for their inputs abroad, which could affect production.
Zimbabwe in May cut its 2016 economic growth forecast to 1.4 percent from an initial projection of 2.7 percent, blaming the drought and weak commodity prices.Advertisement