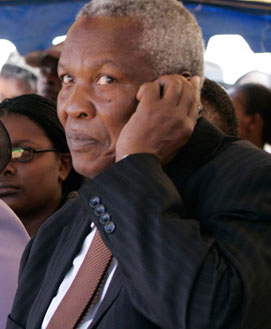 ZIMBABWE remains stuck in the Stone Age although still trying to frantically transit into the Cold War era. The state has learnt nothing from rude lessons from earlier fascist states like Germany under Hitler.
The country is on a free fall into oblivion and seems to be unable to save itself- a consequence of its actions in the last three decades.
Since April 1980, Zanu PF has consciously created a fascist state underpinned by genocidal tribalism, reverse racism, mob psychology, reckless national policies, love for incapacitated leadership and politicians. The same mentality reigns supreme to date making it impossible for Zimbabwe to join the rest if the world in the new world.
All these traits, culture and traditions were imported from Maputo during the struggle for political independence that materialized in April 1980.
The ostrich mentality still prevails, driven by a false sense of superiority. The national paradigm remains one of someone coming through to solve current problems and thereafter the same problem causers benefiting from the new clean slate. This mentality walks on two feet both in government and private sector.
Almost every institution in Zimbabwe is dysfunctional or is technically seized long back to execute its mandate rendering it on survival mode. All statutes and policy pronouncements by all arms of government have been designed to loot the docile citizens’ limited resources rendering them near destitute. This culture is evident in parking laws to illegal toll gates; in police roadblocks that are as good as ATMs for ZRP; in fines for not carrying a spare wheel to raids on corporate accounts by Zimra.
All these are signs of a broke government that is desperate to find money to meet its day to financial obligations including sustaining a 400 000 strong un-functioning civil service. Surely, a government running on a $4bn budget can be well served by about 150 000 members of the civil service.
This government never applies its mind on the economy save for reinforcing the unpractical Indigenisation legislation. The ruling elite can’t even read signs from the ZSE where two flagship companies namely Delta and Econet have lost a lot of value in market cap terms. According to last week’s data, Delta and Econet haven market caps of $846m and $196m respectively.Advertisement

Intolerance of all sorts has reached 1963 levels. Ultra tribalism and regionalism is so stark now more than ever before. The height of this was when the acting Speaker of Parliament sort to stop one parliamentarian addressing parliament in one of the three official languages. The upside maybe that government business is now articulated in parliament in one of regional dialects.
A fellow colleague once asserted that Zimbabwe remains the only country whereby you can’t make sense of what is happening in the country by reading newspapers. My response was a resounding to the contrary! When you read Zimbabwean newspapers you are confronted with tribalism, regionalism, lack of well thought out articles, inept reporting coupled with shallow editing.
Some cocooned Zimbabweans proclaim that what is happening in Zanu PF is unZimbabwean. Again to the contrary! When the liberation movement split into two in August 1963 it was due to tribalism and votes of no confidence. Therefore the loud noises coming from fighting government ministers and very senior members of Zanu politburo is normal in Zimbabwe.
As the world moves on appreciating that the economy is what makes the core of any nation, Zimbabwe remains stuck in the Stone Age. Some discussions that newspapers report on including those that take place in cabinet and politburo must be worrying to every sober Zimbabwean. The language used doesn’t even hold well at family dinner table conversation to a point that some senior members wept during such.
A lot Zimbabweans can’t figure out that Zanu PF like that proverbial snake is undergoing internal changes. After the dismissal of Joice Mujuru in 2014 only two longest serving Zanu PF ‘original ‘ group remain i.e. Emerson Mnangagwa and Sydney Sekeramai. Maybe very soon there will be only one left! It is therefore true that the main drivers of Zanu PF agenda are young members. These young members are just cut from the same cloth with their predecessors.
Zimbabwe is therefore headed for very interesting times. If it was a premier league team surely they would be relegated. However Zimbabwe will go down unaware that most commodity prices have all but crushed while they are implementing anti investor policies. Oblivious to their precarious position, Zimbabweans still afford the luxury of supporting a clueless candidate just because they come from their village!
Ndabenhle Mabhena writes in his personal capacity. Get him on: ndabenhlemabhena2@gmail.com