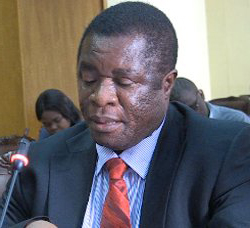 MBADA Diamonds chairman Robert Mhlanga wants government to stop selling diamonds at the centre of the global diamond trade in Antwerp, Belgium saying the process was costly and rewards Zimbabwe’s European Union foes.
Frosty relations between Zimbabwe and the EU, which saw Brussels impose sanctions on President Robert Mugabe, his inner circle and selected firms in 2002 over alleged rights abuses, appear to be thawing after the bloc progressively eased the embargo since 2009 when the veteran ruler agreed to share power with the opposition.
Mugabe and his Zanu PF party regained control of government in another disputed poll in 2013, but the EU has continued the rapprochement and is set to resume direct development assistance to Harare this year.
Mhlanga told the parliamentary committee on Youth, Indigenisation and Economic Empowerment that Zimbabwe should set up its own diamond exchange to plug revenue losses in commissions paid to the Antwerp World Diamond Centre.
At least 84 percent of all rough diamonds and 50 percent of all polished diamonds pass through Antwerp.
Mbada is a 50/50 joint venture between the state owned Zimbabwe Mining Development Corporation and New Reclamation Group’s Grandwell Holdings of South Africa.
“I have strong reservations about Antwerp because they are our yesteryear enemies. We have actually reeled under sanctions, thanks to Brussels and for us now because they have claimed to have lifted sanctions and we run to them. Personally, I have my own reservations,” Mhlanga said.
“I don’t think that is good. I strongly believe that Zimbabwe as a country we have capacity to hold auctions in this country where hundreds of companies can attend.
“There is a multiplicity of benefits when you invite people to do tenders in your own country. You bolster your own tourism industry… I don’t believe in appeasing a foe.”
He did not say how much commission the miners were paying.
Zimbabwe has held two diamond auctions at Antwerp in December last year and last month, realising $10,5 million from sales of 279,723 carats and $70 million from 959 931 carats.
Harare also has plans to hold auctions in Dubai and Shanghai this year. The country is seen accounting for over a quarter of the world’s diamond output in the next decade.Advertisement