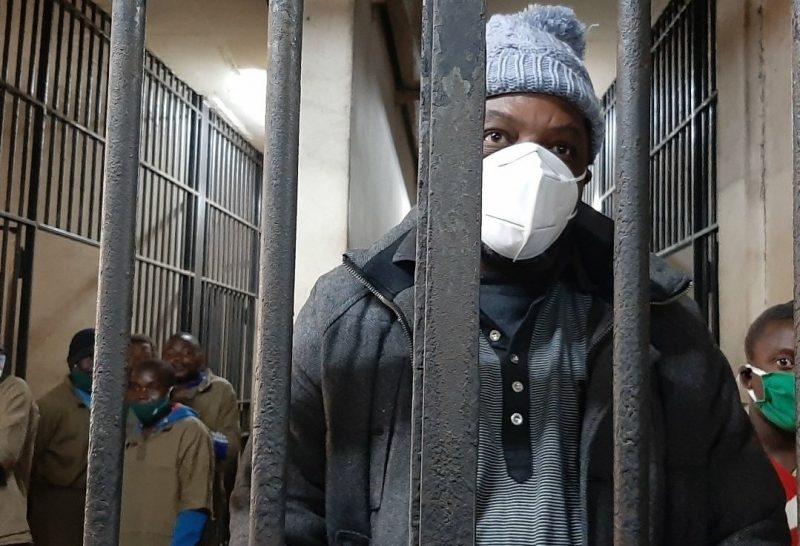 INCARCERATED Zimbabwean journalist Hopewell Chin’ono has resorted to writing letters from prison as he fights his latest arrest.

In his latest installment, leaked to the public via social media on Thursday, he wrote four emotionally-charged pages in capital letters outlining his struggle.

He also appealed to the government to stop targeting opposition politicians and government critics and concentrate on, “saving lives from Covid-19 as the country staggers along with a health system in total shambles”.

Chin’ono was arrested for the third time in six months earlier in January, the latest for allegedly “communicating falsehoods”.

He is accused of posting a video understood to be exposing police brutality during Covid-19 regulations enforcement. In the video, which was widely circulated, it was alleged that a police officer beat a child on its mother’s back, which died.

However, after police investigations, it turned out that a police officer smashed a windscreen of a public commuter and the fragments hit the mother and her baby. Police also claim the baby had survived. As such the police feel Chin’ono and others such as MDC Alliance spokesperson Fadzayi Mahere and legislator Job Sikhala “undermined confidence in law enforcement agency”, hence their arrest and detention.

On Thursday Chin’ono appeared in court seeking bail but the magistrate declined. He is due in court again on February 18. Bail was denied on the basis that “he would commit more crimes if released”.

In his handwritten letter to the public, Chin’ono argued that courts must not be used as an instrument of political persecutions.

He also denied having sent the alleged tweet which is the basis of his arrest.

“No such evidence (tweet) exists in the hands of the police, but the court chose to believe the lying man,” he claimed.

Chin’ono, Sikhala and Mahere’s arrest was condemned by media mogul Trevor Ncube, who owns Alfa Media Holdings, one of the biggest independent media platforms. Ncube also forms part of President Emmerson Mnangagwa’s advisory council, but in his statement said the trio’s arrest was a “chilling attack on freedom of expression by the state”.

Law professor at Kent University in the UK, Alex Magaisa, argued that the law under which the three are being prosecuted was struck down by the Constitutional Court in 2014.

In its 2020 report, Reporters Without Borders ranked Zimbabwe 126th out of 180 in terms of press freedom.

Meanwhile, VOA reports rights groups are calling on Zimbabwe authorities to drop charges against Chin’ono, Mahere and Sikhala saying the charges against the three are part of the government’s efforts to stifle critics.

Paidamoyo Saurombe — from Zimbabwe Lawyers for Human Rights, the organisation representing Chin’ono and the two opposition politicians — has a different point of view.

“It is our considered view that Mr. Chin’ono is not a convicted criminal, he has not been convicted of any crime in the past and hence to say he has a propensity to commit other offenses whilst on bail would be a gross misdirection on the part of the court,” he said.

Saurombe says his client will appeal to the High Court to overturn the magistrate’s ruling.

Zimbabwe Lawyers for Human Rights says the charge of “peddling falsehoods” was removed from Zimbabwe’s Constitutional Court in 2014.

Robert Shivambu, spokesman for Amnesty International in southern Africa, is urging the government to drop the charges, which he says are part of a crackdown on opposition leaders, human rights activists, journalists and any voices critical of the government.

“It is consistent with the harassment and intimidation that we have seen against anyone who respects human rights transparency and accountability in Zimbabwe in recent past,” Shivambu said.

“The government must stop treating dissent as enemies of the state and allow human rights, including the right to freedom of expression, to thrive in Zimbabwe.”

When asked for a comment, Nick Mangwana, Zimbabwe’s information secretary, said, “The decision on who is prosecuted and who is not rests with the prosecutor general in Zimbabwe (Kumbirai Hodzi). Our constitution is clear that that decision by the country’s prosecutor general should not be influenced by anybody. In this particular case, one can actually infer that Amnesty International is interfering with the justice delivery system in Zimbabwe, which is wrong.”

The three defendants — Chin’ono, Mahere and Sikhala — were arrested for commenting on a video in which citizens accused police officers of fatally assaulting a baby, who was on her mother’s back.

Police later issued a statement saying neither the mother nor the baby were assaulted.