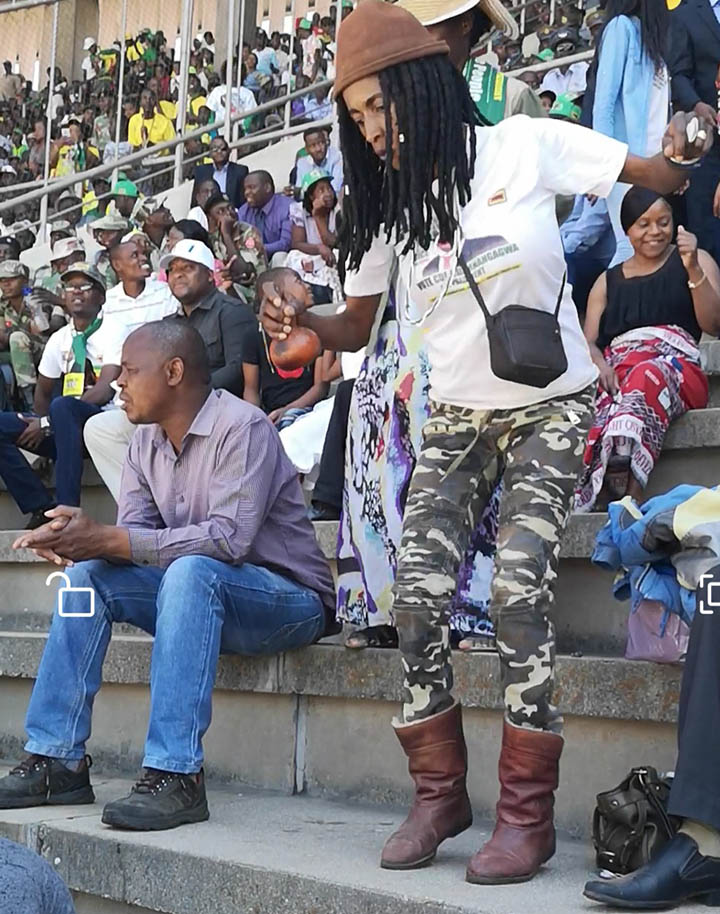 PAMELA Kanjedzana, 45, and her snuff container attracted the attention of NewZimbabwe.com photojournalists with her energetic if unpolished dancing during president Emmerson Mnangagwa’s inauguration on Sunday.

It later turned out that she is the same lady who achieved infamy at the Harare Magistrate’s Courts but not for her dancing, or enthusiasm for the ruling Zanu PF party and its leader.

A Sangoma, those in the court gallery would scurry away from her as she turned up snuff-container in hand for the trial a police officer client identified as Regional Chida, aged 32.

The officer had reportedly sought the assistance of the mystic in a bid to be cleared of the charges.

Kanjedzana and Chida later returned to the same courts to get married.

The nuptials were however halted after Chida’s wife, Chipo Kapere, turned up at court following a tip-off.

The marriage was stopped minutes before the love-birds exchanged vows.

Kapere told court that she was still married to the police officer, adding they have two children aged one and four years.

She revealed that Kanjedzana had been assisting Chida with his court case and accused her of using juju on her husband to coerce him into the secret marriage.

Kanjedzana however claimed that she had been dating Chida for more than ten years and that the two have a 10-year-old son.

The couple, who are reportedly staying together in Waterfalls, approached the courts seeking a review of the decision to block their wedding.

Chida now carries a snuff container similar to his lover’s. It could not be established whether he has also become a Sangoma.