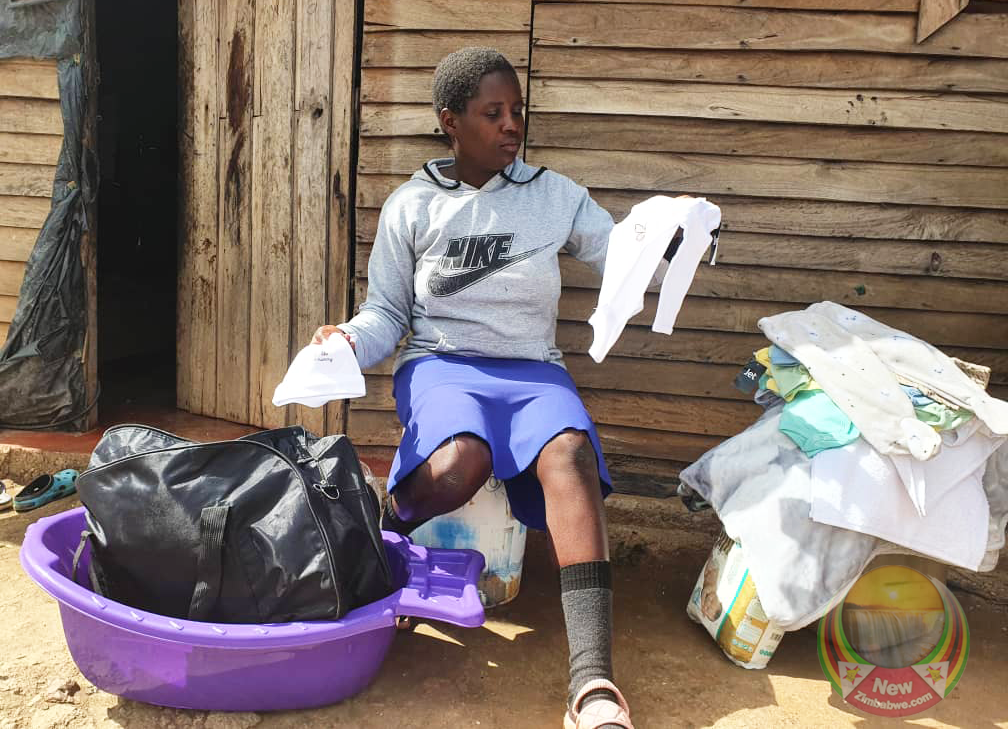 Kelda Makwasha narrates how her pregnancy mysteriously disappeared when she was due for delivery.
Spread This News

TEARS snake down her cheeks as Kelda Makwasha (30) narrates the odd story of her pregnancy, which mysteriously disappeared at a time she thought she was due for delivery.

She claims she fell pregnant over nine months ago and was supposed to deliver her third child on May 23 this year, but something strange happened.

Her bulging tummy suddenly flattened on the night of her expected delivery day (EDD), the foetus disappearing without trace.

“I had a strange dream that night. I was so troubled in my dream, and I suddenly woke up only to find my tummy flat,” she told the NewZimbabwe.com crew which visited her place of residence in Haydon Park, Mt Hampden.

Makwasha and her husband, Gainmore Chiwayo (36), were expecting their third child and had already bought preparatory clothes for the unborn.

“This is a true story and I am still in shock,” said Makwasha’s husband.

He added: “The morning after her pregnancy disappeared, she went for a scan and the authorities told her that she had indeed delivered a baby. But it was difficult to digest because there was no trace at all except that her tummy became flat”.

Chiwayo said it was difficult to accept, but he did not suspect any foul play because when it happened he was there.

“If I was not around I would have suspected that she did something to the baby, but there were no signs that she had given birth. That is what is troubling us.

“We appeal to anyone who can assist us in this situation to reach out. We need closure,” he said.

“I even pulled out a few diapers and packed a few clothes because I felt very heavy, I knew I would be in labour any moment,” she said.

Makwasha is seeking closure on what could have happened to her unborn baby.

Still traumatised by the ordeal, she occasionally rummages through the clothes her baby was supposed to wear on delivery, ruffling and refolding them.

The mother of two said she is living in pain and the incident still sends shivers down her spine.

Now she is sharing a bed with her two minor sons and husband, fearing that the boys might disappear as well.

“Now I make sure that my children are not out of my sight and even take them to and from school because I do not know what is happening in my family,” she says tearfully.

What she finds strange is that a female neighbour, in what appears to be a taboo, always pestered her to give away her unborn baby.

She, however, refused to disclose the name of the wary woman.

“The lady was also married before and she had trouble conceiving, then she returned to her parents home. I’m not saying she is the suspect, but we found it strange that she would always ask me to give her my unborn child so that she could play with the baby.”

“I always reprimanded her over this and even some neighbours who heard her saying such things would warn her against it but she never stopped. The lady would always ask for my baby each time I met her,” she said.

Makwasha said after her pregnancy vanished, she has met the same woman on a number of occasions but she never passed any comments or asked for the baby like before.

“I have been watching her from day one and I knew about her pregnancy from a very early stage. When she was due, she even asked me to stay around and I could see that the baby was almost due for delivery,” said the neighbour.

Makwasha believes she was bewitched.

She could, however, not release her Antenatal documents although she claimed that she would go to Mt Hampden clinic for regular check-ups.

“Unfortunately, I don’t have the cards with me right now. I would also go to some faith healers, who would assist me during my pregnancy. They also told me that my baby was fine,” she said.

Makwasha said initially she had challenges with her husband who could not accept what had happened, but the two have since found peace with each other.

The family is planning on visiting some faith healers but have no clue where to start.

The morning after her pregnancy vanished, Makwasha rushed to a local clinic where a scan was done.

However, doctors who spoke to NewZimbabwe.com said it is impossible for one’s pregnancy to disappear.

“She was not pregnant. She had pseudocyesis,” said a South Africa based gynaecologist.

Pseudocyesis is a condition in which one has all signs and symptoms of pregnancy except for the confirmation of the presence of a fetus.

Only recently have doctors begun to understand the psychological and physical issues that are at the root of pseudocyesis.

Although the exact causes still aren’t known, doctors suspect that psychological factors may trick the body into “thinking” that it’s pregnant.

Another doctor, Munyaradzi Mtetwa concurred with his colleague.

Interpreting the notes written on Makwasha’s scan results Mtetwa said,“..if she was pregnant then the scan would show a uterine thickening and cervical changes typical of someone who just delivered.

“The scan does not go back to being normal, especially a day after delivery.

“If everything checks out then I would suggest a scan of the pelvis and abdomen…but if the pregnancy had reached nine months and suddenly disappeared then, I don’t have an answer.”

He added: “You would assume a cyst ruptured but that comes with serious symptoms, including bleeding.

“Fibroids don’t rupture, so they are out. I would think she had a bladder problem but for nine months she would be seriously sick by now,” said the doctor.