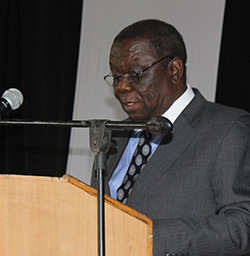 “You can rig the election but you cannot rig the economy”
THIS unvarnished truth about Zimbabwe’s economy has finally revealed itself, courtesy of Morgan Tsvangirai, leader of the country’s main opposition party, the Movement for Democratic Change (MDC-T).
Precipitated by a massively rigged election of July 2013 ‘won’ by President Robert Mugabe, the fact that the country’s economy has once again slipped into the abyss is an incontrovertible and stubborn reality. Companies have been shutting down en masse. Those that haven’t are struggling to pay bills, chiefly wages. The economy is cash-strapped and a graver crisis is looming.
The one sacrosanct secret known to all Zimbabweans is that all the problems bedevilling the economy are premised on politics. The blame rests squarely with the nonagenarian dictator, Robert Mugabe, who has been presiding over a remorselessly corrupt government and holding the country hostage for 34 years. But now, the chickens are coming home to roost, the ailing leader and his sycophants know clearly that his days are numbered. While the economy continues to implode; time is running out. At the same time, the old man is tired and clueless about how to deal with this crisis, let alone the internal fissures erupting from power struggles within his own party.
The future is uncertain. The jostling over succession in Mugabe’s Zanu PF party has intensified. Come 2018, when the country heads for the polls, one thing is certain, Mugabe’s name will not be on the ballot. Never again! In the inevitable absence of Zanu PF mastermind Robert Mugabe in 2018, the opposition MDC-T must seize the opportunity by readying itself for an imminent win, this time ultra-vigilantly to avoid another “stolen election”. The MDC-T has had its fair share of challenges that have culminated in the suspension of internal rebels such party deputy treasurer Elton Mangoma believed to be working in cahoots with the party’s secretary general Tendai Biti for the ouster of Tsvangirai.
Naturally the question becomes: Who in the MDC-T is fit enough (physically, psychologically, emotionally and spiritually) to deliver victory for democracy in 2018? Now, there can be plenty of candidates for the MDC-T presidency but those plotting the ouster of Morgan Tsvangirai, at this present moment, have a minuscule apprehension of political underpinnings of opposition politics in Zimbabwe. It is plain insincerity of purpose masquerading as leadership renewal. They are oblivious to the evil and ruthless machinations of this animal called Zanu PF which has been in power for 34 years. Since its inception, the MDC- T has endured torture and brutality. Hundreds of its members have been abducted and murdered in cold blood. Morgan Tsvangirai himself endured such.Advertisement

The spawning of myriad myths that have seen Tsvangirai being portrayed as weak and unintelligent is not only mischievous and counterproductive but plain treachery to the struggle for democracy and change. Morgan Tsvangirai gives Zanu PF sleepless nights and hallucinations. Even Eddie Cross, a former rebel calling for leadership renewal in MDC-T, finally admitted at a recent rally in Bulawayo that Tsvangirai is indeed “the king” of the opposition. He is also the lion that has been brave enough to send chills in the spines of Zanu PF’s machinery of suppression and repression, be it in the politburo, military, police or the intelligence services. Whoever does not see the hidden hand of these forces in the current so-called MDC-T leadership wrangles needs to have his or her head examined.
The hopeless rivals