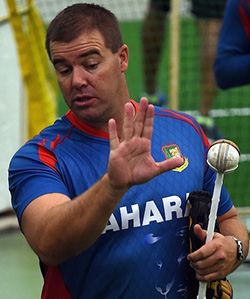 ZIMBABWE Cricket have conducted interviews to fill the position of head coach, left vacant by the sacking of Dav Whatmore in June.
Heath Streak, Andy Blignaut and South Africans Peter Kirsten and Justin Summons were interviewed by five ZC board members on Wednesday.
An appointment is expected to be made before the Sri Lanka Tests later this month and is likely to be a two-year contract with the mandate to ensure Zimbabwe qualifies for the 2019 World Cup.
Of the candidates, Streak is considered the favourite while Summons is the dark horse. Based in Johannesburg, Summons worked with both Prosper Utseya and Brian Vitori to correct illegal bowling actions. Both bowlers have subsequently been cleared to play.
Summons will have tough competition from Streak, who was Zimbabwe’s bowling coach under Alan Butcher between 2010 and 2013 and has had stints with Bangladesh and at the IPL since.
Streak will likely be able to continue in his role with IPL team Gujarat Lions, which occupies him for only two months a year, even if he gets the Zimbabwe job.
Blignaut does not have the same experience as Streak but does share local knowledge. He has been coaching at Peterhouse, one of Zimbabwe’s most prestigious sporting schools, and was being considered for a role with Zimbabwe’s under-19 side earlier this year.
Kirsten is also currently involved at a school, Redhill in Johannesburg, while also working as a commentator on SABC Radio. His most recent coaching experiences are all in Africa; he was involved with Uganda, Kenya and Sierra Leone. Kirsten also coached Western Province in the past.
Zimbabwe’s South African connection is strong. Their most recent acting head coach was Makhaya Ntini, who took over for ODIs against India and two Tests against New Zealand.
With only one victory in eight games, Ntini, who does not have any coaching qualifications apart from the Level II that all former Test players automatically hold, came under pressure and Zimbabwe were forced to seek out another head coach.Advertisement

Ntini is still in Zimbabwe and players have been training under him and batting consultant Lance Klusener in the lead-up to matches against Pakistan A. Ntini and Klusener, who have signed contracts with ZC, are expected to be retained in the roles of bowling coach and batting consultant respectively.
Zimbabwe are scheduled to play two Tests against Sri Lanka in Harare starting on October 29, after which they will play an ODI triangular series also involving West Indies.