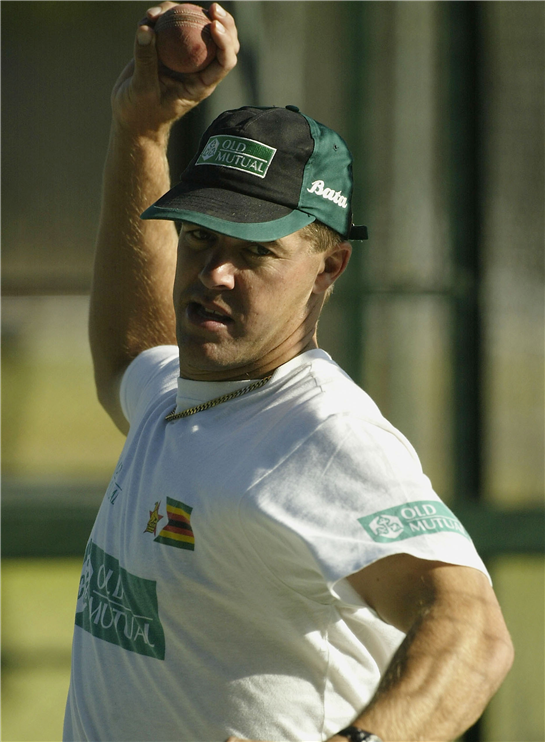 HEATH Streak can relate his situation to Frank Lampard playing for Manchester City against Chelsea, where the English footballer played for 13 seasons. In Streak’s case the connection is deeper. He is a living legend in Zimbabwe who is now plotting against them as Bangladesh’s bowling coach.
The former Zimbabwe captain and coach shifted base earlier this year, having taken up the new role before Bangladesh’s ODI series against India. He has high respect in Bangladesh, having performed regularly against them: Streak averages 16.20 and 18 with the ball against Bangladesh in Tests and ODIs, respectively. He has also played club cricket in the country, and has been there for more than five months now.
For the Bangladeshi ear, his use of “Insha Allah” instead of “hopefully” was a slight surprise, as much as his “we” being now used for Bangladesh would be for a Zimbabwean.
“I suppose I a little bit feel like Frank Lampard playing for Manchester City against Chelsea,” Streak told ESPNcricinfo.
“I love Zimbabwe but I am also here in Bangladesh, really enjoying it. My job is to make sure we do the best we can. I am also judged by how the seamers perform. I will be giving our best and hoping that they can compete, that we win both series.”
As the bowling coach, he saw the pace bowlers do well against India, but they disappointed largely in the West Indies. He has now worked with seven pace bowlers, but has felt it unnecessary to make major changes in their make-up. He has so far imparted tactical knowledge and believes that small changes can have a major impact on a player’s performance.
“I have not really that way inclined. A lot of these bowlers have bowled so much,” Streak said. “It is more subtle, tactical things, getting our percentages better, just a little more thought behind what we are trying to achieve while bowling. Nothing major. There are one or two fringe players we are looking [at] to change a few things.
“With the senior players it is more tactical and small technical things. At this level, a minor technical change can have a major effect. Someone’s wrist positioning being a little more consistent, where he delivers from in the crease, small things like that can have a big impact on performance. Hopefully they are starting to buy in and I having to say less and helping them on tactical side of things.”Advertisement

At his disposal for the first Test, Streak has Rubel Hossain, Shahadat Hossain, Shafiul Islam and Al-Amin Hossain.  The four pace bowlers offer similar pace and movement, but have various issues in their bowling that have to be eradicated and improved.
Rubel’s inability to take wickets in Tests has shot up his average to 82.29 in 20 matches. Among those who have taken at least 25 wickets or bowled more than 3,000 deliveries, he has the worst bowling average.
Streak pointed out that the lack of first-class cricket when Rubel is not playing international cricket has contributed to this dearth in the longer format. Rubel has played 37 first-class matches overall, including the 20 Tests.
“I think his [Rubel Hossain] potential is much better than his record,” Streak said. “It has to do with the periods in between of not playing first-class cricket which helps these guys get into the rhythm of that form of cricket.
“We are trying to increase the volumes so that these guys are used to bowling high number of overs and having the breaks, trying to simulate what they are going to get in the Tests. It takes time.”
Streak does not want his pace attack to relent, look disinterested and only wait for the spinners to take wickets. He wants them to be involved and have important roles during the Test series.
“Obviously Bangladesh conditions are much tougher for the quick bowlers,” Streak said.
“So we have been working on the processes of how we want to bowl at the Zimbabweans and how best we can utilise the conditions.
“The pace bowlers have a very important role to play. They can’t just expect the spinners to do all the work. New ball and obviously in the middle spells, they have to dig in deep.”