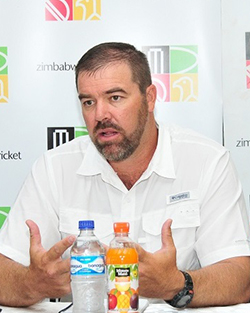 HEATH Streak has decided not to continue as Bangladesh’s bowling coach as his two-year contract terminates at the end of this month. The BCB was waiting on him and would have renewed the contract if he was willing to stay.
“I have decided that I shall leave my role as National Bowling Coach when my contract expires at the end of the month,” Streak said in a statement.
“I would like to thank the BCB for the opportunity afforded to me in 2014. It has been a thoroughly enjoyable experience and I will continue to follow Bangladesh’s progress closely.
“I feel now is the right time for me and my family to make this decision and I look forward to the future as I look to continue my coaching career.”
The confirmation ended days of speculation about Streak’s future in this position after it was recently reported that he had applied to the BCCI’s National Cricket Academy in Bangalore.
Streak is also currently bowling coach of Gujarat Lions in the IPL.
The BCB had appointed Streak in May 2014. His contract stipulated him to work for 450 days across two years and also as consultant for the other representative teams under the board.
Streak was part of Bangladesh’s rejigged coaching group in 2014. Under him, Bangladesh won a Test series and two ODI series against Zimbabwe, they qualified to the knockout stage of the 2015 World Cup, and won maiden ODI series against Pakistan, India and South Africa.Advertisement