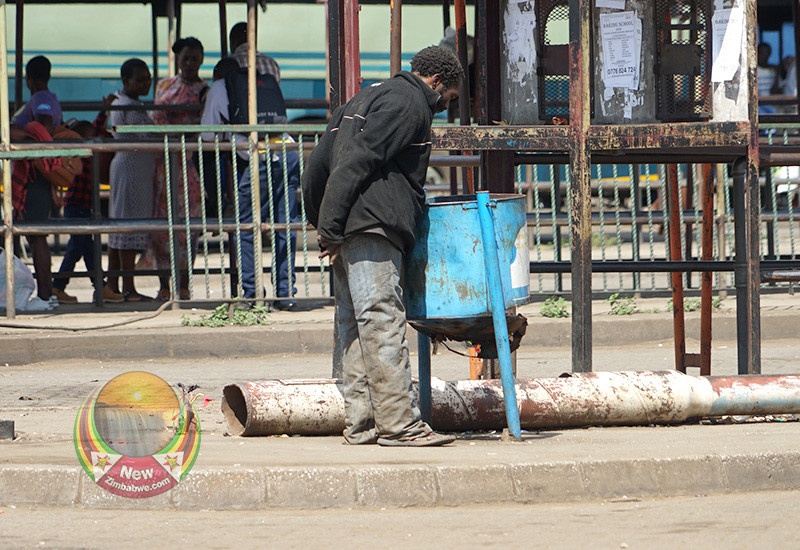 STREET dwellers in Harare say their living conditions have been worsened by the outbreak of the Covid-19 disease.

The street dwellers, among them grown-up men who have lived for years without a roof on their heads, Saturday narrated heart-rending tales of seeing some of their colleagues die silently without access to medication, food, clean water and places to call home.

One 46-year-old Maphosa said he found himself on the streets after losing parents two decades ago and also failing to locate any of his siblings.

“I have been in the streets for 22 years and I am 46 years old now,” he told NewZimbabwe.com.

“I have not enjoyed street life to this date.

“All hopes of ever owning a home or having a family are fading now.”

Maphosa is originally from Masvingo but grew up in Karoi, Mashonaland West province.

He says about his situation, “you feel incomplete as if you do not belong to society. It is so painful when you cannot even afford the basics which others have, more-so without a place to call home.

“Since 1995, I have been roaming the streets trying to make a living.

“Unfortunately, nothing tangible has materialised. My parents died long-back.

“I do not even know where they were buried. I have not heard from any of my 10 brothers and sisters for over two decades now.”

Maphosa, who had his face mask shoved inside his pocket, said he survived on “piece jobs” such as car washing.

He was not amused with government which recently conducted an operation to rid Harare CBD streets of its dwellers without suggesting where they could go.

The operation was part of the measures employed by authorities to try and prevent the spread of coronavirus.

Added Maphosa with a slice of bread in his hand, “We face many challenges my sister. Sometimes police chase us away from the city centre.

“We have no blankets or clothes to keep us warm.

“I just wish I could get a piece of land to do some farming and also put up a structure and be part of a normal society because many people think we are insane.”

Another street dweller, Munyaradzi Kapikinyu (25) from Mutoko also said he lost his parents at an early stage in life. Relatives could not take him in and he ended up on the streets.

“We have no information on what is going on in the country right now regarding our welfare,” he said.

“We heard that some of us were taken Mt Hampden by the Social Welfare department. We missed the opportunity though.

“We are willing to have a home and do some practical jobs so that we can take care of ourselves.”

Another street dweller who did not want to be identified was bitter about public hospitals’ attitude towards vulnerable groups.

“We are only surviving by the Grace of God. We eat from public bins. We sleep in open spaces.

“When you need medical attention, for example at Parirenyatwa Hospital, the staff prefers to serve those who can afford to pay as opposed to us.

“In most cases, we are asked to wait for services that never come. We thank some hospital nurses for providing us with face masks.

“We are aware of the Covid-19 disease and we also practise social distancing as you can see from the way we are seated here.

“That is the life of a ‘vagrant or chigunduru’ as most of you call us.

“No one wants to be close to you. There is a woman from an Embassy (name supplied) who normally pays for our bills when we fall sick and other generous people around who also help us with food and clothing.

“This is not the life we wanted or chose. We fell into this situation due to circumstances beyond our control but having no shelter is the biggest challenge one can face in life,” he said.

He added that he and a friend were part of the crew which was accommodated at Mt Hampden Centre by the social welfare department but most of them escaped due to overcrowding and other challenges.