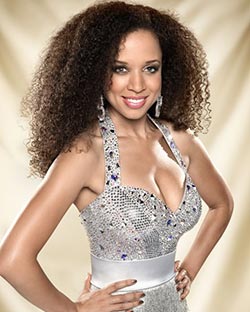 MODEST Natalie Gumede has asked for a Strictly cover up, as she feels the skimpy outfits are too revealing!
The 29-year-old, who played Kirsty Soames in ITV soap Coronation Street, has reportedly returned most of her outfits back to the designers of the BBC hit ballroom dance show Strictly Come Dancing and requested that more material is added to the daring hemlines.
Gumede, grand-daughter of pre-Independence Zimbabwe president Josiah Zion Gumede, said: “It’s kind of down to costume in a way.
“I kind of turn up on Friday and see how much material is in the dress and nine times out of ten I get some added!”
Natalie will face model Abbey Clancy, singer Sophie Ellis-Bexter and BBC Breakfast presenter Susanna Reid in the all-female final.
Despite having professional dance training in her youth, bookies William Hill have placed her least likely to win with odds of 9-1, in comparison to Abbey 9-4, Sophie at 5-2 and Susanna as the firm favourite at 6-5.
A spokesperson from the betting firm, Rupert Adams said: “93% of bets placed in the last 24hours have been for the top three, there’s hardly anything between them.”
Not willing to flash the flesh to rake in the votes, Natalie prefers to feel comfortable in what she wears on the dance floor.
She continued: “I think sometimes costume see you objectively and sort of go ‘well that looks good’ because they’re seeing you in the show and say ‘well you look great in that’
“Whereas as a person you have to be comfortable so it’s just finding that happy medium and they will work with you on that.”
This week’s final will see Natalie and professional dance partner Artem Chigvinstev dance as the underdogs for the Strictly title.
Dancer Brendan Cole, who is paired with brunette stunner Sophie Ellis-Bexter, said this year’s Strictly Come Dancing had been the best series “by a country mile.”