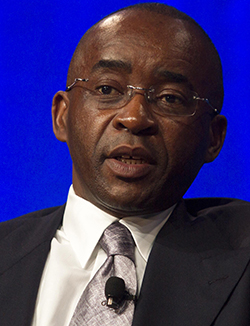 STRIVE Masiyiwa, Zimbabwe’s wealthiest man, has just rented a $40,000-a-month luxury pad in New York City, it was revealed Wednesday.
According to the New York Post, Masiyiwa who is now based in London, has just moved into a five bedroom luxurious unit at Manhattan’s 737 Park Ave which was developed by leading real estate investor Harry Macklowe.
The revelation will likely discomfit the telecoms tycoon and philanthropist, who never flaunts his wealth and is notoriously protective of his private life.
His 12th-floor rental was originally asking $49,500 a month.
It features five bedrooms, 7½-bathroom unit, a windowed chef’s kitchen, a master suite with a windowed dressing area and two spa bathrooms.
Should they want to buy the unit outright, the Masiyiwas would have to fork out around $19 million.
Built in 1940, 737 Park Ave has been transformed into a glamourous contemporary condominium, taking its place alongside Park Avenue’s grand apartment houses, says Macklowe Properties.
“Each home is thoughtfully designed with gracefully flowing layouts, generous uses of space, large living, dining and bedrooms, solid oak floors and new casement windows,” the company adds.
“Residents enjoy 24-hour doorman and elevator operators, a resident manager, fitness centre, children’s playroom, private storage and bicycle and stroller storage.
“Entertaining, dining and social events are available in our garden room – a wonderful amenity unique to 737 Park Avenue residents.
“Homes have been created that are special, but so is Park Avenue.”
With a net worth estimated by Forbes Magazine at $600-plus million, Masiyiwa is the founder and chairman of Econet Wireless – a global telecoms business started in Zimbabwe which now operates in 15 countries across Africa, Europe, South America and the East Asia Pacific Rim.
A leading and respected entrepreneur, Strive says his Econet group is “one of a small, but rapidly growing number of global companies from Africa that are at the forefront of ensuring that the voice of African business is heard at major international gatherings.
“The company not only participates in such events, but has also actively sponsored, hosted, and supported meetings and dialogues, to promote better understanding concerning African economic issues, as well as social development issues, health and the environment.”Advertisement