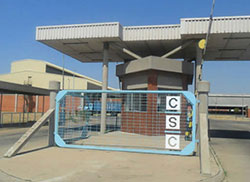 STRUGGLING meat processor Cold Storage Company (CSC) has been ordered to pay 205 workers over $400 000 in salary arrears.
The workers approached the arbitrator on May 27, 2014 demanding their outstanding salaries and wages as at April 2013.
The arbitrator, Peter Chirongoma ordered the company to pay workers a total of $453 110. The workers then took the award for registration at the Bulawayo High Court.
Justice Lawrence Kamocha ordered the company pay the workers the money awarded by the arbitrator.
The Judge ruled that CSC must show cause why the arbitration award done by the arbitrator should not be registered by filing its papers of opposition within 48 hours of receiving the order.
“If the respondent fails to comply with this order within 14 days deputy sheriff or his lawful assistant is directed to issue a warrant of execution against property for an amount of $453 110 as specified in the arbitration award certification, attach without any further restrain from the respondent,” he ruled.
It could not be immediately verified if the company had filed opposing papers.