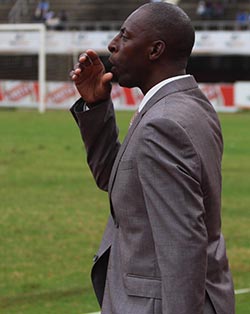 FC Platinum 1-2 Harare City
BIGBOY Mawiwi’s woes persisted on Saturday after his Harare City fell 2-1 to FC Platinum to extend his losing streak to six games.
Raymond Uchena’s late penalty could not inspire City to come back and overturn the result after Quadr Amini and Donald Ngoma had scored for FC Platinum.
It was a woeful afternoon for Mawiwi as his side dominated the match but could not win and his job is now under serious threat.
Things are not well for the 2013 PSL Coach of the Season who was left cursing referee Maxwell Nyamhuri for “unfair” officiating after Amini’s goal was from the penalty spot.
Although he benefited from one of Nyamhuri’s decisions which gifted Uchena the penalty, Mawiwi was not pleased with the manner in which the whistleman handled the match.
While it was City’s sixth consecutive defeat, FC Platinum coach Lloyd Mutasa was a relieved man after romping to the second win of the season.
Elsewhere, Chiredzi United registered their first win of the season after beating Bantu Rovers 2-0 at Luveve Stadium.
David Temwanjira grabbed a brace that handed Chiredzi some hope after a bad start to the season.
It was a day of breaking season records after Hwange lost for the first time after falling 2-0 to How Mine.
Kuda Musharu struck his fourth goal of the season while Wonder Sithole weighed in with another goal for How Mine.
Saturday Results: Bantu Rovers 0-2 Chiredzi (Luveve), How Mine 2-0 Hwange (Luveve), FC Platinum 1-2 Harare City (Mandava)
Sunday Fixtures: Triangle v ZPC Kariba (Chishamiso 1500), Chapungu v Shabanie Mine (Ascot 1500), Black Rhinos v Chicken Inn (Rimuka 1500), Dynamos v Buffaloes (Rufaro 1500), Highlanders v Caps United (Barbourfields 1500)